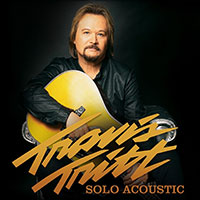 Travis Tritt will be performing an event in the next dates is right in your area. Buy tickets for your favorite performer or group and you will be able to visit his show already tomorrow!

Share with friends:
Updated: 01-27-2023
James Travis Tritt is an American country music singer, songwriter, and actor. He signed to Warner Bros. Records in 1989, releasing seven studio albums and a greatest hits package for the label between then and 1999. In the 2000s, he released three studio albums on Columbia Records and one for the now defunct Category 5 Records. Seven of his albums (counting the Greatest Hits) are certified platinum or higher by the Recording Industry Association of America (RIAA); the highest-certified is 1991's It's All About to Change, which is certified triple-platinum. Tritt has also charted more than 40 times on the Hot Country Songs charts, including five number ones — "Help Me Hold On," "Anymore," "Can I Trust You with My Heart," "Foolish Pride", and "Best of Intentions" — and 15 additional top ten singles. Tritt's musical style is defined by mainstream country and Southern rock influences.

He has received two Grammy Awards, both for Best Country Collaboration with Vocals: in 1992 for "The Whiskey Ain't Workin'," a duet with Marty Stuart, and again in 1998 for "Same Old Train", a collaboration with Stuart and nine other artists. In addition, he has received four awards from the Country Music Association, and has been a member of the Grand Ole Opry since 1992.

Tritt exited Columbia in July 2005, citing creative differences over My Honky Tonk History. He signed to the independent Category 5 Records in February 2006, and served as the label's flagship artist. In March 2007, a concert promoter in the Pittsburgh area sued Tritt, claiming he had committed to play a show, but then backed out and signed to play a competing venue. Tritt's manager denied he had ever signed a contract with the promoter. Tritt released his first single for Category 5 in May 2007: a cover of the Richard Marx song "You Never Take Me Dancing." It was included on his only album for Category 5, The Storm, which American Idol judge Randy Jackson produced. The album featured a more rhythm and blues influence than Tritt's previous works. "You Never Take Me Dancing" peaked at number 27 on the country charts; a second single, "Something Stronger Than Me," was released in October, but it did not chart. Category 5 closed in November 2007 after allegations that the label's chief executive officer, Raymond Termini, had illegally used Medicaid funds to finance it. A month later, Tritt filed a $10 million lawsuit against Category 5, because the label had failed to pay royalties on the album, and failed to give him creative control on The Storm.

In October 2008, Tritt began an 11-date tour with Marty Stuart. On this tour, they performed acoustic renditions of their duets; Tritt also performed five solo shows. Tritt signed a management deal with Parallel Entertainment in December 2010. He continued to tour through to 2012 and into 2013, with most of his shows being solo acoustic performances. Tritt acquired the rights to the songs on The Storm and re-issued it via his own Post Oak label in July 2013 under the title The Calm After... The re-release included two covers: the Patty Smyth and Don Henley duet "Sometimes Love Just Ain't Enough", which he recorded as a duet with his daughter Tyler Reese, and Faces' 1971 hit "Stay with Me".

Although he had been singing since childhood, Tritt said that he began to put "a little more soul" in his voice after his church band performed at an African-American church. He said that he took interest in how African-American singers put "all these bends and sweeps and curls" in their voices, and began emulating that sound. While performing at these churches, he also took interest in gospel singers such as Andraé Crouch. Later on, he began listening to Southern rock acts such as Lynyrd Skynyrd through the recommendation of a friend, as well as the bluegrass music that his uncle exposed him to. Tritt said that he found his songwriting began to develop during the creation of his demo tape, when he had written a song called "Gambler's Blues" that "felt a lot more connected to Southern rock" than his previous writings. He cites country, rock and folk as his influences. Stephen Thomas Erlewine contrasts him with contemporaries Clint Black and Garth Brooks, saying that Tritt was "the only one not to wear a hat and the only one to dip into bluesy Southern rock. Consequently, he developed a gutsy, outlaw image that distinguished him from the pack." Zell Miller, in the book They Heard Georgia Singing, said that Tritt has an "unerring ability to walk the narrow path between his country heritage and his rock leanings to the acclaim of the devotees of both."

Regarding his songwriting style and single choices, Tritt said that he writes "strictly from personal experiences" and does not follow a particular formula. He described "Here's a Quarter" as "one of the simplest three-chord waltzes I've ever written," and said that label executives were reluctant to release it because they thought that it was a novelty song. Also, he was told that "I'm Gonna Be Somebody" would not be a hit because it did not contain any rhymes, and fought the release of the song "Country Club" because he did not think that it fit his style. He also said that, despite their low peaks, the more rock-influenced "Put Some Drive in Your Country" and "T-R-O-U-B-L-E" helped generate sales for their respective albums more so than the top ten hits from those albums.

Looking for the cheapest concert tickets for the show of Travis Tritt Tour 2024? If yes, then welcome to our portal offering a wide choice of either cheap of VIP tickets. Furthermore, we guarantee that here, you will definitely find so desired tickets for the performance of the Travis Tritt 2023 Tour dates you adore.

The show of Travis Tritt is worth seeing. You won’t regret because this talented person will gift you unforgettable emotions, help you forget about all problems and allow you to jump into the fantastic world of music for only one evening.

The primary target of our service is to offer Travis Tritt tour tickets for the show of your favorite singer at the most affordable price. You may be sure that choosing our ticket service, you will not overpay and get the entrance ticket for the incredible performance, you were waiting for so long. We know everything about the way how a professional ticket service should work. So, with us, you’ll get the lowest Travis Tritt ticket prices and the best places for the show.