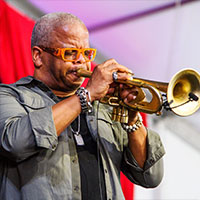 Terence Blanchard will be performing an event in the next dates is right in your area. Buy tickets for your favorite performer or group and you will be able to visit his show already tomorrow!

Share with friends:
Updated: 10-03-2022
Terence Oliver Blanchard is an American jazz trumpeter, composer, and music educator. Blanchard started his career in 1980 as a member of the Lionel Hampton Orchestra, then Art Blakey and the Jazz Messengers. He has composed more than forty film scores and performed on more than fifty. He received his first nomination for the Academy Award for Best Original Score on Spike Lee's 2018 film BlacKkKlansman.

From 2000 to 2011, Blanchard served as artistic director of the Thelonious Monk Institute of Jazz. In 2011 he was named artistic director of the Henry Mancini Institute at the University of Miami. In the fall of 2015 he was named a visiting scholar in jazz composition at Berklee College of Music. In 2019, the University of California, Los Angeles (UCLA), named Blanchard their Endowed Chair in Jazz Studies, where he will remain until 2024.

The Metropolitan Opera announced it will stage Blanchard's opera Fire Shut up In My Bones, with a libretto by Kasi Lemmons, in their 2021-2022 Season. As of 2019, this will be the first production by a black composer staged by the Metropolitan Opera in the organization's 136-year history.

While studying jazz, Blanchard began touring with the Lionel Hampton Orchestra. In 1982, Wynton Marsalis recommended Blanchard as his replacement in Art Blakey's Jazz Messengers. Blanchard was the band's music director until 1986. He played alongside Blakey, Donald Harrison, and Mulgrew Miller, recording five albums from 1984 to 1988. He and Donald Harrison left Art Blakey in 1986 to form their quintet 'The Terence Blanchard/Donald Harrison Quintet' and signed with CBS Records. He left the Jazz Messengers in 1990 to pursue a solo career.

In the 1990s, after an embouchure change, Blanchard recorded his self-titled debut for Columbia Records which reached No. 3 on the Billboard Jazz chart. After performing on soundtracks for Spike Lee movies, including Do the Right Thing and Mo' Better Blues, Lee wanted Blanchard to compose the scores for his films beginning with Jungle Fever (1991). Blanchard has written the score for most of Spike Lee's films since, including Malcolm X, Clockers, Summer of Sam, 25th Hour, Inside Man, and BlacKkKlansman.

In 2005, Blanchard was part of the ensemble that won a Grammy Award for Best Jazz Instrumental Album for his participation on McCoy Tyner's Illuminations, an award he shared with Tyner, Gary Bartz, Christian McBride and Lewis Nash.

Blanchard was a judge for the 5th annual Independent Music Awards to support independent artists' careers. In 2009 in the Disney movie, The Princess and the Frog, Blanchard played all of the alligator Louis' trumpet parts. He also voiced the role of Earl the bandleader in the riverboat band.

The show of Terence Blanchard is worth seeing. You won’t regret because this talented person will gift you unforgettable emotions, help you forget about all problems and allow you to jump into the fantastic world of music for only one evening.

The primary target of our service is to offer Terence Blanchard tour tickets for the show of your favorite singer at the most affordable price. You may be sure that choosing our ticket service, you will not overpay and get the entrance ticket for the incredible performance, you were waiting for so long. We know everything about the way how a professional ticket service should work. So, with us, you’ll get the lowest Terence Blanchard ticket prices and the best places for the show.