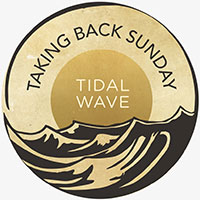 Taking Back Sunday will be performing an event in the next dates is right in your area. Buy tickets for your favorite performer or group and you will be able to visit his show already tomorrow!

Share with friends:
Updated: 01-19-2022
Taking Back Sunday is an American rock band from Long Island, New York. The band was formed by guitarist Eddie Reyes in 1999. The band's members are Adam Lazzara (lead vocals), John Nolan (lead guitar, keyboards, vocals), Shaun Cooper (bass guitar), and Mark O'Connell (drums), and they are joined by Nathan Cogan (guitar) for their live performances. Nolan and Cooper left the group in 2003 before rejoining in 2010.

The band has released studio albums with various past members Fred Mascherino (guitar, vocals), Matthew Rubano (bass guitar), Matthew Fazzi (guitar, keyboards, vocals), and Eddie Reyes (guitar). Louder Now (2006) was the band's breakout mainstream album, notably because of the popularity of its lead single "MakeDamnSure". The album sold over 900,000 copies and peaked at No. 2 on the United States Billboard 200, surpassing the band's previous Billboard 200 peak in 2004 at No. 3 with Where You Want to Be.

Before the release of their first studio album Tell All Your Friends (2002), they released Taking Back Sunday's EP in 2001, when the band featured former lead vocalist Antonio Longo. At that time, the EP received very little attention, eventually resulting in the band seeking a new lead singer, Adam Lazzara. Lazzara had at first joined the band as its guitarist, left a few months after it formed, then replaced original bassist Jesse Lacey (now of Brand New) during the EP's recording sessions. John Nolan and Shaun Cooper left the band in 2003 only to rejoin in 2010, in time for the band's release of their eponymous album Taking Back Sunday (2011). The album was produced by Eric Valentine and released through Warner Bros. Records.

In 2014, the band released their sixth studio album Happiness Is to positive reviews. The album reached number 10 on the US Billboard 200. In 2016, they released their seventh album Tidal Wave.

For their 20th Anniversary tour, the band have employed the use of a specially made coin to flip at shows in locations where they are playing two nights in a row. The coin toss will decide the second album to be played the first night of the pair of shows, either Louder Now or Where You Want to Be. (Tell All Your Friends will be played each night.) In an interview with The Aquarian, John Nolan said that the band was not currently on a label, indicating that they left Hopeless Records.

The show of Taking Back Sunday is worth seeing. You won’t regret because this talented person will gift you unforgettable emotions, help you forget about all problems and allow you to jump into the fantastic world of music for only one evening.

The primary target of our service is to offer Taking Back Sunday tour tickets for the show of your favorite singer at the most affordable price. You may be sure that choosing our ticket service, you will not overpay and get the entrance ticket for the incredible performance, you were waiting for so long. We know everything about the way how a professional ticket service should work. So, with us, you’ll get the lowest Taking Back Sunday ticket prices and the best places for the show.