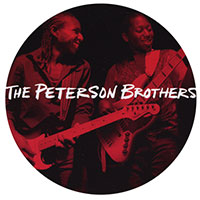 Peterson Brothers will be performing an event in the next dates is right in your area. Buy tickets for your favorite performer or group and you will be able to visit his show already tomorrow!

Share with friends:
Updated: 01-27-2023
The Peterson Brothers are an American soul, funk, blues and jazz band featuring brothers Glenn Peterson, Jr. on vocals and lead guitar and Alex Peterson on bass. The Austin Chronicle writes that: "Bastrop upstarts the Peterson Brothers have been tearing up the stage at the Continental Club since they were both teens." The brothers played their first gig with blues legend Pinetop Perkins 10 years ago.

The Peterson Brothers have been described by Jamfeed as “Some of the most talented musicians I have seen come out of Austin." American Blues Scene writes: "they’ve become one of the most popular festival fixtures in the US, in just 10 years." Their festival gigs have included Austin City Limits, Chicago Blues Fest, Minneapolis State Fair and Old Settler's Music Fest. In September, 2019 they performed at Crossroads Village at Eric Clapton's Crossroads Guitar Festival in Dallas. The Minneapolis Star Tribune described a Peterson Brothers festival set "like a NASCAR race" with a "crescendoing jam through the Dramatics’ What You See Is What You Get or the version of Al Green’s Take Me to the River that sounded like it originated on Stevie Wonder’s Innervisions — all with Glenn soloing on guitar with the same flashy but fulfilling approach as their recent tourmate Gary Clark Jr."

In addition to Gary Clark, Jr., who The Peterson Brothers performed Come Together with at the 2019 Austin City Limits Festival, they have opened for and played with Robert Randolph and the Family Band, Kenny Wayne Shepherd, Buddy Guy and B.B. King. They've told interviewers that their music career grew from digging through garage sale albums their mother and grandmother brought home, and learning the classics of funk, soul, blues and rock. On PBS Newshour Oct. 2019, Gary Clark, Jr. talked about Austin musicians on his radar: "The Peterson Brothers is a brother duo and they play bass and guitar—some of the baddest cats in the world."

The show of Peterson Brothers is worth seeing. You won’t regret because this talented person will gift you unforgettable emotions, help you forget about all problems and allow you to jump into the fantastic world of music for only one evening.

The primary target of our service is to offer Peterson Brothers tour tickets for the show of your favorite singer at the most affordable price. You may be sure that choosing our ticket service, you will not overpay and get the entrance ticket for the incredible performance, you were waiting for so long. We know everything about the way how a professional ticket service should work. So, with us, you’ll get the lowest Peterson Brothers ticket prices and the best places for the show.