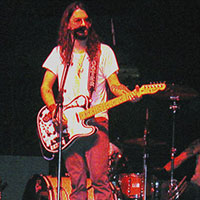 Shooter Jennings will be performing an event in the next dates is right in your area. Buy tickets for your favorite performer or group and you will be able to visit his show already tomorrow!

Share with friends:
Updated: 10-21-2021
Waylon Albright "Shooter" Jennings is an American singer-songwriter who has released seven albums and numerous EPs. He also has made some appearances and cameos in films. Jennings is active mainly in outlaw country and Southern rock genres. Jennings is the son of country music legends Waylon Jennings and Jessi Colter. There are two different accounts regarding how he got his nickname "Shooter". His mother cited her, and husband Waylon Jennings', love of western culture and cowboy art for inspiring the gun-derived moniker. But his father said he came up with the name when, moments after the newborn emerged from his mother's womb, the boy sprayed a nurse before anyone could put on his first diaper. “I love my mom,” says Jennings, “but I like Dad’s version better. And I believe it’s true. He didn’t make like that up.”

Currently signed to Universal South, Jennings made his debut with the single "4th Of July" of his 2005 album Put the "O" Back in Country, which peaked at No. 22 on the Billboard country charts. Jennings has since followed with six more full-length studio albums: Electric Rodeo (2006), The Wolf (2007), Black Ribbons (2009), Family Man (2012), The Other Life (2013) and Countach (For Giorgio) (2016), in addition to a live album, a compilation, and numerous EPs. In 2018 it was announced Jennings will be releasing his eighth album called Shooter, under Dave Cobb’s Low Country Sound imprint label.

On October 2013, Jennings announced the formation of his new label and multi-format recording company, Black Country Rock. Their initial releases included: a remastered release of the Waylon Jennings album Right for the Time, two live albums (one from Jessi Colter titled Live from Cain's Ballroom, and one from Jennings titled The Other Live), as well as a recording of "You Are My Sunshine" featuring vocals from both Jamey Johnson and Jennings. All four were released on vinyl, cassette, CD, as well as digitally.

On February 27, 2014, Jennings revealed he would be releasing a spoken word follow-up to Hierophant's 2010 album, Black Ribbons, titled The Magic, inspired by first story in the controversially interactive horror series thirteen. In addition to The Magic Jennings also announced, that after nearly a decade of waiting, he would be releasing the 1995 collaborative album, Fenixon.Both projects were released during 2014's Record Store Day, and subsequently sold out.

Jennings collaborated with Duff McKagan for his 2019 solo album, Tenderness. The album was recorded with Jennings band, The Waters and The Suicide Horn Section, amongst others. In March 2019, a tour was announced in support of the album, featuring Jennings band playing both the support slot as well as the headline slot as the backing band for Duff.

The show of Shooter Jennings is worth seeing. You won’t regret because this talented person will gift you unforgettable emotions, help you forget about all problems and allow you to jump into the fantastic world of music for only one evening.

The primary target of our service is to offer Shooter Jennings tour tickets for the show of your favorite singer at the most affordable price. You may be sure that choosing our ticket service, you will not overpay and get the entrance ticket for the incredible performance, you were waiting for so long. We know everything about the way how a professional ticket service should work. So, with us, you’ll get the lowest Shooter Jennings ticket prices and the best places for the show.