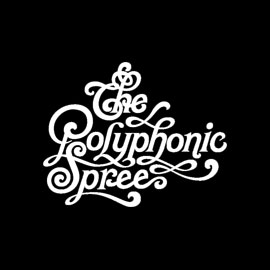 The Polyphonic Spree will be performing an event in the next dates is right in your area. Buy tickets for your favorite performer or group and you will be able to visit his show already tomorrow!

Share with friends:
Updated: 10-03-2022
The Polyphonic Spree is an American choral rock band from Dallas, Texas that was formed in 2000 by Tim DeLaughter. The band's sound relies on a variety of vocal and instrumental color by featuring a choir, flute, trumpet, french horn, trombone, violin, viola, cello, percussion, piano, guitars, bass, drums, electronic keyboards, and EWI.

DeLaughter's previous group, Tripping Daisy, came to an abrupt end in 1999 when guitarist Wes Berggren died of a drug overdose. The Polyphonic Spree was formed, in part, in reaction to Berggren's death.

In 2000, DeLaughter collaborated with 12 other musicians to put together a sound that reflected the music he grew up with. He wanted to explore the orchestral palette and pop sensibility of The Beatles, The Association, The 5th Dimension, Wings, Electric Light Orchestra and The Beach Boys and the vocal style of Ozzy Osbourne from Black Sabbath. Within two weeks, The Polyphonic Spree created a 30-minute set, donned their signature white choir robes and performed with Grandaddy and Bright Eyes.

On August 6, 2013, the band played a sold-out concert at London's Village Underground to mark the release of their album Yes, It's True. The performance was broadcast live on Vimeo. A US release show at the Granada Theater in Dallas followed on August 9, and the band toured in support of the album worldwide. A live DVD was released in October 2013, and the band played their famous Holiday Extravaganza in Dallas, Texas on December 21. In 2014 the band released the studio album Psychphonic.

The Polyphonic Spree headlined the 2015 Big D NYE party, December 31, 2014, at Dallas's Victory Park at the American Airlines Center. The free outdoor concert was attended by a crowd of over 40,000, who gathered for the annual New Year's Eve event. Perhaps because of the 35 °F weather, the choir wore matching winter ponchos, while other musicians wore pajamas. DeLaughter's headgear resembled a Fred Flintsone Grand Poobah lodge hat (tall fur with buffalo horns). Covers included Wings' "Band on the Run" and the Thunderclap Newman hit "Something in the Air." The band occasionally paused to sync with television cues, as the concert was broadcast live to a regional television audience of over 12 million in Texas and surrounding states. In July 2016, choir member Julie Doyle and her partner Tony Barsotti (artist and drummer for the Dallas band Hagfish) opened Here, a restaurant-lounge in East Dallas, where they live.

The show of The Polyphonic Spree is worth seeing. You won’t regret because this talented person will gift you unforgettable emotions, help you forget about all problems and allow you to jump into the fantastic world of music for only one evening.

The primary target of our service is to offer The Polyphonic Spree tour tickets for the show of your favorite singer at the most affordable price. You may be sure that choosing our ticket service, you will not overpay and get the entrance ticket for the incredible performance, you were waiting for so long. We know everything about the way how a professional ticket service should work. So, with us, you’ll get the lowest The Polyphonic Spree ticket prices and the best places for the show.