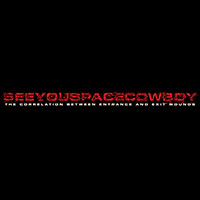 See You Space Cowboy will be performing an event in the next dates is right in your area. Buy tickets for your favorite performer or group and you will be able to visit his show already tomorrow!

Share with friends:
Updated: 05-25-2022
SeeYouSpaceCowboy (stylized as SeeYouSpaceCowboy...) are an American hardcore punk band formed in San Diego in 2016. It was founded by guitarist Jesse Price, vocalist Connie Sgarbossa, Drummer Ethan Sgarbossa and guitarist Taylor Allen. Their name is taken from a phrase shown on many of the end cards of the 1998 anime Cowboy Bebop.

As of January 25, 2019 it was revealed the band had signed to Pure Noise Records, speaking about their new partnership with Pure Noise Records, the band said: “We are beyond happy to be part of the Pure Noise family. After a summer of searching, we decided to go with Pure Noise because of the diverse and innovative roster, a showcase for some of the most exciting bands in the scene. We are very eager to show the world the next chapter of this band, with this great team behind us.“ Alongside the announcement the band digitally released the album Songs For The Firing Squad, which the band describes as "a collection of the first two years as a band, along with two new tracks that foreshadow the new direction we are headed." The band also released an accompanying music video for the song “Self Help Specialist Ends Own Life”

On July 30, 2019 they released a brand new track, "Armed with Their Teeth" and announced the title for their debut full length record, The Correlation Between Entrance and Exit Wounds. On August 27, 2019 they released another single, "Put On A Show, Don't Let Them See You Fall". The record was released on September 27, 2019 and met with immediately favorable reviews. The album has a notable sound change from their first couple years. The sass present in the previous releases is almost entirely gone and the instrumentals take a lot more from metalcore (as opposed to sasscore).

SeeYouSpaceCowboy's musical style has been characterized as sasscore, metalcore, grindcore, mathcore, hardcore punk and art-punk. The band chooses to self-describe as sasscore and often disagrees with the label "screamo"; lead singer Connie Sgarbossa states, "Everybody in this band came from the screamo scene, and we'd been doing it for a minute, but with this band we really wanted to make the distinction that this isn't a screamo band." The band even wrote a song titled "Stop Calling Us Screamo" Connie Sgarbossa clarifies " That song was just our tongue-in-cheek jab at the people that want to throw us into that scene."

The show of See You Space Cowboy is worth seeing. You won’t regret because this talented person will gift you unforgettable emotions, help you forget about all problems and allow you to jump into the fantastic world of music for only one evening.

The primary target of our service is to offer See You Space Cowboy tour tickets for the show of your favorite singer at the most affordable price. You may be sure that choosing our ticket service, you will not overpay and get the entrance ticket for the incredible performance, you were waiting for so long. We know everything about the way how a professional ticket service should work. So, with us, you’ll get the lowest See You Space Cowboy ticket prices and the best places for the show.