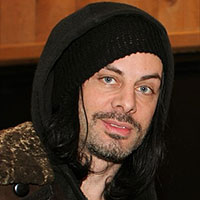 Richie Kotzen will be performing an event in the next dates is right in your area. Buy tickets for your favorite performer or group and you will be able to visit his show already tomorrow!

Share with friends:
Updated: 08-10-2022
Richard Dale "Richie" Kotzen, Jr. is an American guitarist, singer, songwriter and producer. Kotzen has a prolific solo career, with a back catalogue of more than twenty album releases, was a member of the glam-hard rock band Poison from 1991-1993, Mr. Big from 1999-2002, and since 2012 has been the frontman of the band The Winery Dogs. Kotzen was signed to California-based Shrapnel Records from 1988 until 1991.

Richie Kotzen began playing piano at the age of five. At the age of seven, he was inspired to learn the electric guitar by the band Kiss. He started his career in a band named Arthur's Museum. Kotzen was eventually discovered by Shrapnel Records' Mike Varney, and he recorded his first solo album by the age of 19, the first of two instrumental records, simply entitled Richie Kotzen. He created the video Rock Chops for REH video in 1989, highlighting many of his formative techniques, including using wide-intervals and fluid sweeping. One year later, a second solo album called Fever Dream was released, which was the first one to also feature his lead vocals. Since then, Kotzen has released a long series of more than twenty albums with musical influences ranging from Rock, Hard Rock, Pop, Blues, Blue-eyed-soul, R&B and Funk to Jazz Fusion.

By the end of 2016, The Winery Dogs went on hiatus and Kotzen focused on his next solo record Salting Earth, which came out on April 14, 2017. From August until late September Kotzen completed a European tour.

On January 25, 2018, Kotzen released a video for his new single called The Damned via youtube, which was filmed at Paramount Ranch in Agoura, California by director Vicente Cordero. On June, 5, 2018, a second video single called Riot was released via YouTube, which was again directed by Vicente Cordero. On December, 11, 2018, Kotzen announced a Winery Dogs Tour through the US for May, 2019, via his official Facebook page, which they completed successfully then. After releasing only two video singles in 2018 and another one (Venom) in 2019, to withhold all other newly written songs for his triple album 50 For 50 planned for his 50th birthday, on which 50 new tracks can be heard, that album has been released on February 3rd (Kotzen's birthday). The 50 songs are divided on 3 CDs. Also a music video was shot for the new song called Devil's Hand, in which he can be seen with his wife, bass player Julia Lage.

Kotzen has described his style as a mix of rock, blues, heavy metal, jazz, fusion, and soul music. Kotzen utilizes a heavy amount of legato and sweeping in his playing. As his main influences, he lists Jimi Hendrix, Stevie Ray Vaughan, Eddie Van Halen, Jason Becker (who produced his first album), Allan Holdsworth, and many other jazz and fusion players. Kotzen, since around 2007, has opted to stop using guitar picks and been playing exclusively with his fingers ever since.

Looking for the cheapest concert tickets for the show of Richie Kotzen Tour 2023? If yes, then welcome to our portal offering a wide choice of either cheap of VIP tickets. Furthermore, we guarantee that here, you will definitely find so desired tickets for the performance of the Richie Kotzen 2022 Tour dates you adore.

The show of Richie Kotzen is worth seeing. You won’t regret because this talented person will gift you unforgettable emotions, help you forget about all problems and allow you to jump into the fantastic world of music for only one evening.

The primary target of our service is to offer Richie Kotzen tour tickets for the show of your favorite singer at the most affordable price. You may be sure that choosing our ticket service, you will not overpay and get the entrance ticket for the incredible performance, you were waiting for so long. We know everything about the way how a professional ticket service should work. So, with us, you’ll get the lowest Richie Kotzen ticket prices and the best places for the show.