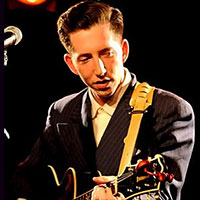 Pokey LaFarge will be performing an event in the next dates is right in your area. Buy tickets for your favorite performer or group and you will be able to visit his show already tomorrow!

Share with friends:
Updated: 01-27-2023
Pokey LaFarge is an American musician, writer, and actor raised in Illinois, and now is based in Los Angeles, California.
LaFarge independently released his first album, Marmalade, in 2006. During the same year, he toured with The Hackensaw Boys. His second solo album, Beat, Move & Shake, was released in 2008 by Big Muddy Records.

Riverboat Soul, the first album with The South City Three, was recorded in July 2009 at the Nashville studio of producer Phil Harris using vintage instruments and electronics. It was released in 2010 by Free Dirt Records and won the Independent Music Award for Best Americana Album. The group's second album, Middle of Everywhere, won the same award in 2011. The band also released Chittlin' Cookin' Time in Cheatham County produced by Jack White for his label, Third Man Records. White asked the band to collaborate with him on the song "I Guess I Should Go to Sleep" for his album Blunderbuss, followed by opening for him on tour.

In 2013, LaFarge signed with Third Man Records and released his first album on the label, accompanied by a larger band that included Chloe Feoranzo, Matthew Meyer, and T.J. Muller. During the next year, he signed with Rounder Records and released Something in the Water in April 2015. In 2017 his album Manic Revelations was released on Rounder Records. On January 22, 2020 LaFarge announced the release of a new album called "Rock Bottom Rhapsody" to be released on April 10th on the New West label.

The group is thought to be "artfully dodgy ambassadors for old-time music, presenting and representing the glories of hot swing, early jazz and ragtime blues" who have "made riverboat chic cool again." Stephen Thompson of NPR says of LaFarge's . .


". . music evokes the old-timey spirit of a thousand crackling 78 RPM records . . and even when you encounter him face to face, he seems to gaze at you out of a dusty archival photo . . Maybe the effect wouldn't be so jarring if LaFarge's music felt inauthentic in some unsettling way . . But his albums never feel like cheap exercises in nostalgia, in part because LaFarge directs his old-fashioned sensibilities in the service of sharp, infectious new material. It feels strange to listen to his work on a CD . . but his songs aren't stiffly posed wax-museum sculptures . . Their energy makes them feel new and alive.


His repertoire consists of a mix of Americana, early jazz, ragtime for string instruments, country blues, Western swing, Vaudeville, and Appalachian folk. "American music is the tops: People respond to it all over the world because it's expressive and powerful," LaFarge told Madison's Isthmus newspaper in 2011.

Looking for the cheapest concert tickets for the show of Pokey LaFarge Tour 2024? If yes, then welcome to our portal offering a wide choice of either cheap of VIP tickets. Furthermore, we guarantee that here, you will definitely find so desired tickets for the performance of the Pokey LaFarge 2023 Tour dates you adore.

The show of Pokey LaFarge is worth seeing. You won’t regret because this talented person will gift you unforgettable emotions, help you forget about all problems and allow you to jump into the fantastic world of music for only one evening.

The primary target of our service is to offer Pokey LaFarge tour tickets for the show of your favorite singer at the most affordable price. You may be sure that choosing our ticket service, you will not overpay and get the entrance ticket for the incredible performance, you were waiting for so long. We know everything about the way how a professional ticket service should work. So, with us, you’ll get the lowest Pokey LaFarge ticket prices and the best places for the show.