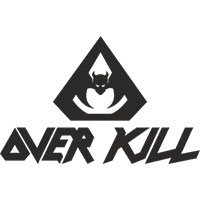 Overkill will be performing an event in the next dates is right in your area. Buy tickets for your favorite performer or group and you will be able to visit his show already tomorrow!

Share with friends:
Updated: 01-27-2023
Overkill is an American thrash metal band, formed in 1980 in New Jersey. They have gone through many line-up changes, leaving bassist D. D. Verni and lead vocalist Bobby "Blitz" Ellsworth as the only constant members. In addition to Verni and Ellsworth, Overkill's current lineup includes Dave Linsk on lead guitar, Derek Tailer on rhythm guitar and Jason Bittner on drums. Along with Nuclear Assault and Anthrax, whose one-time lead guitarist Dan Spitz was also an early member of Overkill, the band is one of the most successful East Coast thrash metal bands, and they are often called "the Motörhead of thrash metal". The band has a notable mascot named "Chaly", a skeletal bat with a skull-like face, horns, bony wings and green eyes, who has appeared on most of their album covers.

To date, Overkill has released nineteen studio albums, an album of cover songs, two EPs, one demo tape and three live albums. They were one of the first thrash metal bands to sign to a major label (having signed to Atlantic Records in 1986), and rose to fame as part of the genre's movement of the mid-to-late 1980s, along with the "big four" (Metallica, Megadeth, Slayer and Anthrax) and other bands such as Exodus and Testament. Overkill achieved their first mainstream success with its second studio album and Atlantic debut, Taking Over (1987), which peaked at number 191 on the Billboard 200. The band's next five studio albums—Under the Influence (1988), The Years of Decay (1989), Horrorscope (1991), I Hear Black (1993) and W.F.O. (1994)—were also successful on the Billboard charts, with the latter two cracking the top ten on the Top Heatseekers chart. Following their split from Atlantic in 1995, Overkill went through some label changes, but continued to enjoy moderate underground success, particularly in Europe and Japan. The band experienced a resurgence of popularity in their home country during the 2010s, with three of their studio albums released that decade—The Electric Age (2012), White Devil Armory (2014) and The Grinding Wheel (2017)—reaching the top 100 on the charts. Overkill has sold over 16 million records worldwide; they are also estimated to have sold more than 625,000 records in the United States since the beginning of the SoundScan era.

On May 4, 2017, Overkill announced that Jason Bittner (formerly of Shadows Fall and Flotsam and Jetsam) had replaced Lipnicki as the drummer of the band.

On February 9, 2018, Overkill announced that they were in the studio working on demos for their nineteenth studio album. Pre-production of the album began that April, and Ellsworth announced that it would be released in February 2019. On June 1, 2018, the band announced that they had begun recording the album. During an interview with Eddie Trunk on Trunk Nation on October 10, 2018, bassist D. D. Verni announced that the album was finished; he was quoted as saying, "I just got the final sequencing and all that, so that's all buttoned up. We're working on the cover now. We still don't have a title — we're gonna have to come up with that soon — but we have a lot of things floating around. And the new release will probably be in February." On November 28, 2018, Overkill announced that the album was titled The Wings of War and would be released on February 22, 2019. The band promoted the album by headlining the 2019 edition of the Killfest Tour, supported by Destruction, Flotsam and Jetsam and Meshiaak, touring North America in the spring with Death Angel and Mothership, and performing at Megadeth's first-ever MegaCruise in the Pacific Ocean that October. They will continue to tour in support of The Wings of War in 2020, including touring the US with Exhorder and Hydraform, and appearing at a handful of metal-related festivals in Europe.

In June 2019, it was reported that Overkill was expected to start writing new material for their 20th studio album by the beginning of 2020. In an interview with Metal Exhumator in October 2019, Ellsworth said, "We just sat down and talked about starting to write in the spring. Maybe late spring, early summer, just say maybe we should just schedule some time to do it. But there's been no ideas with regard to where it's going to go."

Overkill's sound has influenced the genre of thrash metal. Their technique draws on bits and pieces of punk and hard rock as well as NWOBHM. These elements blend to create a fast, aggressive style unique to the band and make Overkill's sound easily recognizable to metal fans; as a result, they have been referred to as "the Motörhead of thrash metal". The band has been influenced by a variety of music, including heavy metal, hard rock, progressive rock and classic rock acts such as Black Sabbath, Led Zeppelin, Deep Purple, Iron Maiden, Judas Priest, The Who, Aerosmith, Rush, Kiss, Alice Cooper, Queen, UFO, Jethro Tull, Motörhead, Saxon, Venom, Ted Nugent, Humble Pie, Rainbow, Manowar, Wishbone Ash and Starz, as well as punk rock and glam rock acts such as the Ramones, the Sex Pistols, The Damned, the New York Dolls, Lou Reed, The Vibrators, Generation X and the Dead Boys. Many of today's new-wave thrash bands have been influenced by older groups in the genre, including Mantic Ritual, who incorporate a variety of stylistic traits reminiscent of Overkill and other thrash bands that had found success in the past. Overkill has also been cited as an influence on the groove metal genre; Dimebag Darrell was influenced by former guitarist Bobby Gustafson's performance on the albums Under the Influence and The Years of Decay, which ultimately led to Pantera changing their style from glam metal to thrash/groove metal as well as Terry Date producing Cowboys from Hell.

Looking for the cheapest concert tickets for the show of Overkill Tour 2024? If yes, then welcome to our portal offering a wide choice of either cheap of VIP tickets. Furthermore, we guarantee that here, you will definitely find so desired tickets for the performance of the Overkill 2023 Tour dates you adore.

The show of Overkill is worth seeing. You won’t regret because this talented person will gift you unforgettable emotions, help you forget about all problems and allow you to jump into the fantastic world of music for only one evening.

The primary target of our service is to offer Overkill tour tickets for the show of your favorite singer at the most affordable price. You may be sure that choosing our ticket service, you will not overpay and get the entrance ticket for the incredible performance, you were waiting for so long. We know everything about the way how a professional ticket service should work. So, with us, you’ll get the lowest Overkill ticket prices and the best places for the show.