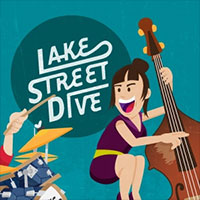 Lake Street Dive will be performing an event in the next dates is right in your area. Buy tickets for your favorite performer or group and you will be able to visit his show already tomorrow!

Share with friends:
Updated: 01-27-2022
Lake Street Dive is a multigenre band that was founded in 2004 in Boston, Massachusetts. The band's original members are Rachael Price (lead vocals), Mike "McDuck" Olson (trumpet, guitar), Bridget Kearney (upright bass), and Mike Calabrese (drums). Akie Bermiss (keyboards) joined the band on tour in 2017 and is on their 2018 album. Lake Street Dive started at the New England Conservatory of Music in Boston. The band was named after a street with many dive bars in Olson's hometown of Minneapolis, Minnesota. The band tours in North America, Australia, and Europe from their base in Brooklyn.

Lake Street Dive released their first Signature Sounds Recordings album, Lake Street Dive, in November 2010. They credit Jim Olsen, President of Signature Sound, as being the band's dad, “because of all the support he gave us when we were so infantile.” By 2012 the four-piece band decided to make a strong commitment as a group and to tour. Bridget Kearney left her other band, Joy Kills Sorrow, to concentrate on Lake Street Dive. They went into the studio to record the album Fun Machine and some singles in November 2012.

Lead singer Rachael Price was still under contract with another label, Claire Vision. This prevented them from releasing the album recorded in the Fall of 2012 featuring Price. In late 2013, an agreement was reached and Lake Street Dive announced the release of their album Bad Self Portraits in February 2014. In 2013 and 2014 they played over 300 gigs in more than 175 different cities, spread between 43 states and 8 countries. Their Bad Self Portraits tour sold out in 40 venues at the start of 2014. "We love all the same songs...We sing along in the car" is the opening line from the only song they co-wrote together and tells something of their life on tour.

Lake Street Dive signed with Nonesuch Records in 2015 and released Side Pony in February 2016 with their new label. The album's name refers to a hairstyle adopted by Kearney and is slang for "unexpectedly diverting the mind's attention". The band made 183 appearances in 2017 and 2018, including tours through North America, Europe, Japan, New Zealand, and Australia.

The band released their second album with Nonesuch, Free Yourself Up in May 2018. Kearney says, "This album is based in the realities in our time which have inevitably become part of everyone's daily life. It's something you think about and obsess over—and write songs about. Free Yourself Up is about empowering yourself, emboldening yourself, no matter what's going wrong." In November 2018, they released Freak Yourself Out, a five-song EP of songs written but not recorded for Free Yourself Up.

All the band members were singing and/or playing musical instruments by the time they were in third grade. Most had some classical music training growing up and their parents were musicians. In their own way, had migrated to jazz by the time they met. However, the band says they were influenced by the music their parents were playing at home. This ranged from classic jazz to '60s soul to rock and roll.

The band members profess to love the entire Beatles discography. Kearney wrote "Hello? Goodbye!" and the band plays "Don't Make Me Hold Your Hand", both referencing Beatles tunes. Olson says he was inspired by Paul McCartney's love/vice lyrical concept in "Got to Get You Into My Life" when he wrote "You Go Down Smooth." The band's traditional Halloween specials and covers on the EP release Fun Machine give an idea of the genres that influence them. These range from songs by the Mamas and the Papas, ABBA, the Drifters, Fleetwood Mac, Hall & Oates, Jackson 5 and Paul McCartney.

The band has been influenced by classic pop and swing era jazz. "We want it to sound like the Beatles and Motown had a party together," says drummer Mike Calabrese. Critics describe their music as "Sounds Like: Llewyn Davis's favorite pop group; Motown meets the Brill Building in jazzy, soulful, woulda-been Sixties chart toppers."

The show of Lake Street Dive is worth seeing. You won’t regret because this talented person will gift you unforgettable emotions, help you forget about all problems and allow you to jump into the fantastic world of music for only one evening.

The primary target of our service is to offer Lake Street Dive tour tickets for the show of your favorite singer at the most affordable price. You may be sure that choosing our ticket service, you will not overpay and get the entrance ticket for the incredible performance, you were waiting for so long. We know everything about the way how a professional ticket service should work. So, with us, you’ll get the lowest Lake Street Dive ticket prices and the best places for the show.