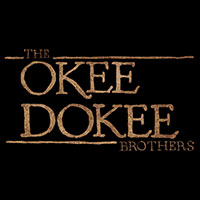 The Okee Dokee Brothers will be performing an event in the next dates is right in your area. Buy tickets for your favorite performer or group and you will be able to visit his show already tomorrow!

Share with friends:
Updated: 01-27-2023
The Okee Dokee Brothers are an independent American bluegrass and American roots children's music duo from Minneapolis. Their 2012 CD/DVD release Can You Canoe?, with music and videos created during a 2011 paddle down the Mississippi River, won a GRAMMY for Best Children's Album in the 55th GRAMMY Awards. They released their second CD/DVD called Through the Woods in May 2014, with music and videos created during a 2013 trek up the Appalachian Trail. The album garnered a GRAMMY nomination in 2014. They traveled through the Southwest for another album and DVD, Saddle Up, which was also nominated for a Grammy in the best children’s album category. Joe and Justin also published two picture books under Sterling Publishing (Sterling Children's) titled Can You Canoe? And Other Adventure Songs and Thousand Star Hotel. Their primary branding artist, Brandon Reese, illustrated the books.

Most recently (October 2018), The Okee Dokee Brothers released Winterland, an exuberant yet introspective collection of 16 original songs exploring the wonders and beauty of winter. A voyage from autumn to spring, Winterland presents secular winter music the entire family can enjoy while cozying up around the fire. This album also received a GRAMMY nomination in November of 2019.

Bandmates and childhood best friends, Joe Mailander and Justin Lansing, grew up in Denver and toured the midwest with their bluegrass band before settling in Minneapolis and starting their family music band, The Okee Dokee Brothers.

In 2011, Joe and Justin began a canoe trip at the headwaters of the Mississippi River, and ended at the St. Louis Gateway Arch. During their month-long journey on the Mississippi, they camped, canoed, filmed and composed the songs that make up their album Can You Canoe? This CD-DVD is the first release in their Adventure Album Series. Produced by Dean Jones in his Rosendale, NY, straw-bale studio, the record highlights guest appearances from Garth Hudson of The Band, Elizabeth Mitchell of You Are My Flower as well as Morgan Taylor and Rachel Loshak of Gustafer Yellowgold. The album received praise from NPR, won a Parents' Choice Award, and USA Today called it their "...favorite album of 2012". Can You Canoe? also won the GRAMMY Award for Best Children's Album of the Year in early 2013.

In June 2015, The Okee Dokee Brothers went out West for a month-long horsepacking trip along the Continental Divide. They rode horses, camped out, told stories, and wrote songs. Featuring a diverse collective of musicians -- John Sebastian (The Lovin' Spoonful), Carlos Medina (Norteño accordion), Cindy Cashdollar (Asleep At The Wheel), Jim Campilongo (The Little Willies), and The Benally Family (Navajo style singing/Blackfire) -- Saddle Up covers tales of western wildlife, Navajo stories, Southwest-style Spanglish, the issue of guns in western lore, friendship, and more. In 2016, “Saddle Up” was nominated for a Grammy in the best children’s album category.

They celebrate the spirit of the winter season on their latest full-length studio album, Winterland (October 2018). It's an exuberant yet introspective collection of 16 original songs exploring the wonders and beauty of winter. A voyage from autumn to spring, Winterland presents secular winter music the entire family can enjoy while cozying up around the fire. The Okee Dokee Brothers released five winter music videos to accompany the music.

The show of The Okee Dokee Brothers is worth seeing. You won’t regret because this talented person will gift you unforgettable emotions, help you forget about all problems and allow you to jump into the fantastic world of music for only one evening.

The primary target of our service is to offer The Okee Dokee Brothers tour tickets for the show of your favorite singer at the most affordable price. You may be sure that choosing our ticket service, you will not overpay and get the entrance ticket for the incredible performance, you were waiting for so long. We know everything about the way how a professional ticket service should work. So, with us, you’ll get the lowest The Okee Dokee Brothers ticket prices and the best places for the show.