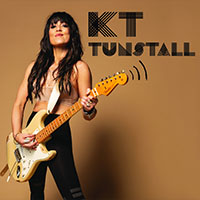 KT Tunstall will be performing an event in the next dates is right in your area. Buy tickets for your favorite performer or group and you will be able to visit his show already tomorrow!

Share with friends:
Updated: 01-27-2023
Kate Victoria Tunstall, known professionally as KT Tunstall, is a Scottish singer-songwriter and musician. She broke into the public eye with a 2004 live solo performance of her song "Black Horse and the Cherry Tree" on Later... with Jools Holland.

Born in Edinburgh to a Hong Kong-born exotic dancer, she was adopted by David and Rosemary Tunstall of St Andrews. At the age of four she started playing piano; later she learned to play other musical instruments. She attended the Lawhead Primary and Madras College in St. Andrews, High School of Dundee and Kent School in Kent, Connecticut in the United States. She earned her BA in Drama & Music in 1996 from the Royal Holloway, University of London. She was awarded an honorary doctorate by Royal Holloway in 2011.

Her debut album was named Eye to the Telescope - the name was inspired by her childhood experiences at her father's physics laboratory at University of St Andrews. Released in 2004, this album launched her music career. That album inspired her nomination for the Mercury Prize in 2005, BRIT Award for Best British Live Act and BRIT Award for Best Breakthrough Act in 2006, and Grammy Award for Best Female Pop Vocal Performance in 2007. She eventually won BRIT Award for Best British Female Artist and European Border Breakers Award, both in 2006. The single "Black Horse and the Cherry Tree" was given the Q Magazine Award for Best Track in 2005, and "Suddenly I See" won the Ivor Novello Award for Best Song in 2006. "Suddenly I See" became a popular hit and has been featured in The Devil Wears Prada, Blind Dating, Ugly Betty, Grey's Anatomy, Love, Rosie, Thrillville, and as a campaign song of the US presidential campaign of Hillary Clinton in 2008.

Tunstall has written soundtracks for films: "Boy" for The Kid, "Miracle" for Winter's Tale, "We Could Be Kings" for Million Dollar Arm, "Float", "Strange Sight" and "1000 Years" for Tinker Bell and the Legend of the NeverBeast, "Fit In" for About Ray, and "Bad Moms (Suite)", "Enough is Enough (Suite)", and "Get Your Tits Up (Suite)" for Bad Moms.

In 2017, Tunstall announced a trilogy of albums following the themes of soul, body and mind. KIN was the first, with the theme of soul. She released the second, WAX, with the theme of body, on 5 October 2018. In 2018, Tunstall contributed several songs to the Pete the Cat children's album including "CatGo & the Nine Lives", "Catalina Casesolver", "Let It Slide" and "CatGo's Weird Song".

Looking for the cheapest concert tickets for the show of KT Tunstall Tour 2024? If yes, then welcome to our portal offering a wide choice of either cheap of VIP tickets. Furthermore, we guarantee that here, you will definitely find so desired tickets for the performance of the KT Tunstall 2023 Tour dates you adore.

The show of KT Tunstall is worth seeing. You won’t regret because this talented person will gift you unforgettable emotions, help you forget about all problems and allow you to jump into the fantastic world of music for only one evening.

The primary target of our service is to offer KT Tunstall tour tickets for the show of your favorite singer at the most affordable price. You may be sure that choosing our ticket service, you will not overpay and get the entrance ticket for the incredible performance, you were waiting for so long. We know everything about the way how a professional ticket service should work. So, with us, you’ll get the lowest KT Tunstall ticket prices and the best places for the show.