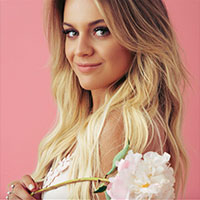 Kelsea Ballerini will be performing an event in the next dates is right in your area. Buy tickets for your favorite performer or group and you will be able to visit his show already tomorrow!

Kelsea Nicole Ballerini is an American country music singer and songwriter. She released her first album The First Time in 2015, and her second album Unapologetically was released on November 3, 2017. She received a nomination for Best New Artist at the 2017 Grammy Awards. Ballerini's two albums have accounted for seven charted songs on the Hot Country Songs and Country Airplay charts. She has four No. 1 singles on the latter, starting with her debut single "Love Me Like You Mean It", which made her the first female artist to send a debut single to the top of that chart since Carrie Underwood in 2006. It was followed by "Dibs" and "Peter Pan", whose peaks also made her the first female country artist to send her first three singles to the top of that chart since Wynonna Judd. Ballerini's fourth No. 1 single is "Legends".

In June 2017, Ballerini released "Legends" as the first single from her second studio album. On November 3, she released her second album, titled Unapologetically. The album debuted at number three on the Billboard Top Country Album Chart and number seven on the Billboard 200 Album Chart, making it her highest charting album on both charts. The second single from the album, "I Hate Love Songs", was released in March. In September 2018, she announced that she would be releasing a deluxe edition of the album with four new tracks. On September 18, 2018, EDM-pop duo The Chainsmokers released a song titled "This Feeling" featuring Ballerini. The third and final single from Unapologetically, "Miss Me More", was released in October 2018. In October, she provided vocals on her husband Morgan Evans' song "Dance With Me". In December 2018, Unapologetically received a nomination for Best Country Album at the 61st annual Grammy Awards.

In the fall of 2018, Ballerini joined the fifteenth season of The Voice as the fifth coach. She coached six contestants who did not get a chair turn during The Blinds, in a new round called The Comeback Stage. The Comeback Stage was a digital companion series to the show. In October 2018, Ballerini released the song "We Were Like". On March 5, 2019, Ballerini was invited by Little Big Town to become a member of the Grand Ole Opry. On April 16, 2019 she was inducted into the Grand Ole Opry by Carrie Underwood. Ballerini embarked on the Miss Me More Tour in support of Unapologetically in April 2019. The tour was a success, with Ballerni selling out multiple dates. In June 2019, Ballerini was a guest on the NBC competition show Songland and released the song "Better Luck Next Time".

The show of Kelsea Ballerini is worth seeing. You won’t regret because this talented person will gift you unforgettable emotions, help you forget about all problems and allow you to jump into the fantastic world of music for only one evening.

The primary target of our service is to offer Kelsea Ballerini tour tickets for the show of your favorite singer at the most affordable price. You may be sure that choosing our ticket service, you will not overpay and get the entrance ticket for the incredible performance, you were waiting for so long. We know everything about the way how a professional ticket service should work. So, with us, you’ll get the lowest Kelsea Ballerini ticket prices and the best places for the show.