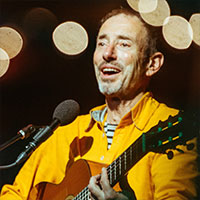 Jonathan Richman will be performing an event in the next dates is right in your area. Buy tickets for your favorite performer or group and you will be able to visit his show already tomorrow!

Share with friends:
Updated: 08-10-2022
Jonathan Michael Richman is an American singer, songwriter and guitarist. In 1970, he founded the Modern Lovers, an influential proto-punk band. Since the mid-1970s, Richman has worked either solo or with low-key, acoustic and electric, backing. Currently, he plays only acoustic to protect his hearing. He is known for his wide-eyed, unaffected, and childlike outlook, and music that, while rooted in rock and roll, is influenced by music from around the world.

From 1988 to 1992, Richman performed mostly as a solo act to support his Rounder albums Jonathan Richman (1989), Jonathan Goes Country (1990), and Having a Party with Jonathan Richman (1991). Around the time of his I, Jonathan album (1992), he formed his performance duo with drummer Tommy Larkin, who would continue to play and record with Richman for more than 25 years. In 1993, he contributed the track "Hot Nights" to the AIDS-Benefit Album No Alternative produced by the Red Hot Organization. Always possessing an ardent cult following, Richman has become better known in recent years thanks to a series of appearances on Late Night with Conan O'Brien.

Another career boost came in the form of the Farrelly Brothers' 1998 film There's Something About Mary, where Richman played half of a two-man Greek chorus with Tommy Larkins, commenting on the plot while performing in the framed action itself. He also appeared briefly in a bar scene in a previous Farrelly Brothers film, Kingpin, and performed the song "As We Walk to Fenway Park" for their 2005 comedy, Fever Pitch.

Richman has continued his release schedule all along, with the Spanish-language ¡Jonathan, Te Vas a Emocionar! (1994), You Must Ask the Heart (1995), Surrender to Jonathan (1996), I'm So Confused (1998), Her Mystery Not of High Heels and Eye Shadow (2001), and Not So Much to Be Loved as to Love (2004). In 1998, a live album of Modern Lovers recordings from the early 1970s was released, Live at the Long Branch & More. A live filmed performance, Take Me to the Plaza, was released on DVD in 2002. His most recent albums are on the Cleveland, Ohio based Blue Arrow Records: 2016's Ishkode! Ishkode! and 2018's SA. Richman's minimalist songwriting style has been described as whimsical and childlike. He himself has stated, "I don’t write, really. I just make up songs."

The show of Jonathan Richman is worth seeing. You won’t regret because this talented person will gift you unforgettable emotions, help you forget about all problems and allow you to jump into the fantastic world of music for only one evening.

The primary target of our service is to offer Jonathan Richman tour tickets for the show of your favorite singer at the most affordable price. You may be sure that choosing our ticket service, you will not overpay and get the entrance ticket for the incredible performance, you were waiting for so long. We know everything about the way how a professional ticket service should work. So, with us, you’ll get the lowest Jonathan Richman ticket prices and the best places for the show.