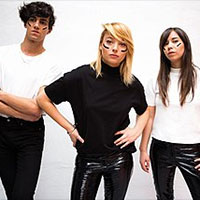 Hyphen Hyphen will be performing an event in the next dates is right in your area. Buy tickets for your favorite performer or group and you will be able to visit his show already tomorrow!

Share with friends:
Updated: 12-02-2022
Hyphen Hyphen is a French electronic pop rock band, singing in English, created in 2011 in Nice. It is composed of three members: Santa (vocals), Adam (guitar), Line (bass), who have been friends since high school.

The band won Group stage revelation of the year on 12 February 2016, acknowledging over 300 concert dates across France. The media hype surrounding their performance of "Just Need Your Love" was unanimous, and on 23 June 2016 they played live for the last ever airing of Le Petit Journal.  The audience were treated to an unforgettable moment of television when Santa got on the table and sang with Beth Ditto, the famous lead singer of Gossip. The band had already played on this very stage for one of the first programmes of the season.

2016 was also a big year for festivals in Hyphen Hyphen's calendar: Le Rock, in all its forms, at Évreux on 25 June 2016, Les Vieilles Charrues festival in Carhaix (Finistère) on 16 July 2016 (where their audience-inspiring “Qui ne saute pas n’est pas niçois” chant paid tribute to the victims of the terrorist attack in Nice the day before), the Rock'n Poche Festival in Habère Poche (Haute Savoie) on 29 July 2019, and the Poule des Champs in Aubérive on 9 September 2016. After spending two years composing and writing, the band announced on 2 March 2018 the release of their second studio album, entitled HH (which would come out on 25 May 2018) with the single Like Boys. A few days later, they published details of a tour. Called HHTour, it would play more than 130 dates across France (including one at the Paris Zénith on 14 June), as well as venues in Switzerland, Belgium and Germany.

The band are now finishing their European tour a year and a half later with a concert at the Têtu Festival, where they are headlining the event's first year on 21 September in Paris. Espousing a more international outlook, this second album has seen the band commissioned by major luxury brands to promote their latest flagship product publicity campaigns: "Si" by Armani with Cate Blanchett (2018), "Rouge Volupté" by Yves Saint Laurent with Kaia Gerber (2019), and Lacoste's "French Panache" (2019), the gender-neutral fragrance.

Levi's has also invited the band to play a DJ set at its pool party at Coachella in 2019, alongside Snoop Dog. In November 2019, the band announced a five-dates European Tour for March 2020. The tour will take place in Berlin, Hamburg, Amsterdam, Antwerp and Stuttgart. On January 15, 2020, the band announced a five-dates tour of North America for spring 2020. The tour will take place in Toronto, Montreal, New York, San Francisco and Los Angeles

Looking for the cheapest concert tickets for the show of Hyphen Hyphen Tour 2023? If yes, then welcome to our portal offering a wide choice of either cheap of VIP tickets. Furthermore, we guarantee that here, you will definitely find so desired tickets for the performance of the Hyphen Hyphen 2022 Tour dates you adore.

The show of Hyphen Hyphen is worth seeing. You won’t regret because this talented person will gift you unforgettable emotions, help you forget about all problems and allow you to jump into the fantastic world of music for only one evening.

The primary target of our service is to offer Hyphen Hyphen tour tickets for the show of your favorite singer at the most affordable price. You may be sure that choosing our ticket service, you will not overpay and get the entrance ticket for the incredible performance, you were waiting for so long. We know everything about the way how a professional ticket service should work. So, with us, you’ll get the lowest Hyphen Hyphen ticket prices and the best places for the show.