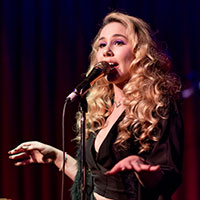 Haley Reinhart will be performing an event in the next dates is right in your area. Buy tickets for your favorite performer or group and you will be able to visit his show already tomorrow!

Share with friends:
Updated: 01-19-2022
Haley Elizabeth Reinhart is an American singer, songwriter and voice actress from Wheeling, Illinois, a suburb of Chicago. She first rose to prominence after placing third in the tenth season of American Idol. In July 2011, Reinhart signed a recording deal with Interscope Records. Her debut album Listen Up! was released on May 22, 2012, to critical acclaim, and she subsequently became the first American Idol alumna to perform at Lollapalooza. After being dropped by Interscope Records following a change in the company's management in 2012, Reinhart expanded the agreement she had with her music publisher, ole, in 2014. Reinhart signed with ICM Partners in March 2016, in addition to her ongoing deal with ole.

Reinhart garnered widespread recognition in 2015 for performing and touring with Scott Bradlee's Postmodern Jukebox. Her most notable collaboration with the band on a Jazz cover of Radiohead's "Creep" spent 58 consecutive weeks on Billboard's Jazz Digital Songs chart and received critical acclaim. In the same year, she gained additional notice when her cover of Elvis Presley's "Can't Help Falling in Love", which was used in a commercial for Extra Gum, became a viral sensation, peaked at number 16 on the US Adult Contemporary chart, and was later certified Platinum by the Recording Industry Association of America on October 4, 2019. Reinhart won a Cannes Lion for Entertainment and a Clio Award for the song in 2016. Additionally, she made her voice acting debut as Bill Murphy in the Netflix animated comedy F Is for Family on December 18, 2015. She reprised the role as a main cast member in the series' second and third seasons.

Her second studio album, Better, served as an expansion of an initially conceived EP and was released on April 29, 2016, following the lead single and title track, "Better", which was released on April 8. The album debuted at number 22 on Billboard's Independent Albums chart. She supported the release of the album with a 2016 summer headlining tour that was held throughout the United States and a spring leg that was held throughout Europe in May and June 2017. Reinhart's third studio album, What's That Sound?, was released September 22, 2017 through Concord Records. The album produced four singles in total, including the lead single, "Baby It's You", which was released June 16, 2017. Reinhart supported the album with a 2017 fall US headlining solo tour.

In 2018, Reinhart gained additional notice as a featured vocalist on Jeff Goldblum's debut album The Capitol Studios Sessions and on Vicetone's single "Something Strange", which peaked at number 23 on Billboard's Dance/Mix Show Airplay charts. On June 1, 2018, she released the standalone single "Last Kiss Goodbye", which charted at number 15 on Billboard's Jazz Digital Songs chart. Reinhart's fourth studio album, Lo-Fi Soul, was released on March 27, 2019. The album produced four singles in total, including the lead single "Don't Know How to Love You", which was released on September 14, 2018. The album was supported with a headlining North American tour in the fall of 2019 and spring of 2020, followed by a European tour in mid 2020.

Looking for the cheapest concert tickets for the show of Haley Reinhart Tour 2023? If yes, then welcome to our portal offering a wide choice of either cheap of VIP tickets. Furthermore, we guarantee that here, you will definitely find so desired tickets for the performance of the Haley Reinhart 2022 Tour dates you adore.

The show of Haley Reinhart is worth seeing. You won’t regret because this talented person will gift you unforgettable emotions, help you forget about all problems and allow you to jump into the fantastic world of music for only one evening.

The primary target of our service is to offer Haley Reinhart tour tickets for the show of your favorite singer at the most affordable price. You may be sure that choosing our ticket service, you will not overpay and get the entrance ticket for the incredible performance, you were waiting for so long. We know everything about the way how a professional ticket service should work. So, with us, you’ll get the lowest Haley Reinhart ticket prices and the best places for the show.