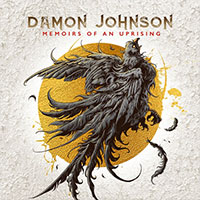 Damon Johnson will be performing an event in the next dates is right in your area. Buy tickets for your favorite performer or group and you will be able to visit his show already tomorrow!

Share with friends:
Updated: 12-02-2022
Damon Rogers Johnson is an American guitarist, vocalist, and songwriter, currently a solo artist and member of Thin Lizzy. In the 1990s he co-founded Brother Cane, and later joined Alice Cooper's band as lead guitarist. He was also the lead guitarist and co-songwriter for hard rock group Black Star Riders from 2012 to 2018. Johnson has also released several solo albums and his songs have been recorded by many artists including Stevie Nicks and Carlos Santana.

In December 2012, Johnson co-founded the Thin Lizzy spin-off band, Black Star Riders, whose first album All Hell Breaks Loose was released in May 2013. Johnson developed a songwriting partnership with frontman Ricky Warwick and the pair co-wrote all the songs on the album: "I joined Thin Lizzy because I wanted to play those great songs with Scott Gorham and Brian Downey. But let me be clear about this – I'm in the Black Star Riders because of Ricky Warwick."

After touring across Europe, the US and Japan throughout 2013 and the first half of 2014, Black Star Riders recorded their second album, The Killer Instinct, released in February 2015, reaching ? 13 in the UK. Johnson stated: "The days of me hopscotching back to Alice Cooper or a Slave to the System album are past. This is the best band I've ever been in. We’re firing on all cylinders." Black Star Riders' third album, Heavy Fire, was released on February 3, 2017, and was followed by tours of the UK and Europe, with further touring in the US during March and April 2018, alongside Judas Priest and Saxon. Heavy Fire reached ? 6 in the UK album charts.

After the US tour, it was announced that Johnson would be leaving the band at the end of 2018 to concentrate on his solo career and session work. His replacement will be Christian Martucci of Stone Sour. The band undertook a tour of South America in November with Luke Morley of Thunder deputising for Johnson, before Johnson returns for further performances in the UK at the end of the year. Martucci will join the band in the studio in early 2019 to record their fourth album. Johnson stated, "Three excellent albums in six years with this great band is one of the proudest achievements of my career, and it has been glorious." He will continue to work with Thin Lizzy, and with Warwick as part of the Warwick Johnson acoustic duo.

After many years of performing solo acoustic shows in the US alongside his other commitments, Johnson played his first solo show in the UK, at The Iron Road in Evesham on October 14, 2014. In November 2014, he debuted his own hard rock trio featuring bass guitarist Tony Nagy and ex-Whiskey Falls drummer Jarred Pope, and performed several shows in the US during April 2015. Later that month he appeared as a guest on That Metal Show alongside Kirk Hammett and Michael Schenker.

During May and June 2015, Johnson performed an acoustic tour of the UK with Ricky Warwick. In August he performed a few shows in the US with The Dead Daisies supporting Whitesnake, temporarily filling in for guitarist David Lowy alongside his Thin Lizzy predecessor Richard Fortus and former Thin Lizzy and Black Star Riders bassist Marco Mendoza. Johnson performed more acoustic UK shows with Ricky Warwick during September, and toured throughout November and December with Black Star Riders, including UK shows supporting Whitesnake and Def Leppard.

Johnson's next solo release, a five-track solo EP titled "Echo", was released on March 18, 2016. Recorded and mixed by The Killer Instinct producer Nick Raskulinecz, "Echo" represents Johnson's first fully electric solo release after the acoustic based albums Dust and Release. Also during 2016, Johnson performed several festival shows with Thin Lizzy, and worked on Black Star Riders' third album, Heavy Fire. A live album, Birmingham Tonight, featuring Johnson, Nagy and Pope alongside second guitarist Tony Higbee, was recorded in Birmingham, Alabama on March 15, 2016. The album was released on September 22, 2017, and features songs from many of Johnson's projects so far. He said, "One of my friends described it as a musical anthology for the different paths my career has taken; that is a fairly accurate assessment."

During September and October 2018, Johnson performed another series of acoustic shows in the UK and Europe alongside Ricky Warwick, supported by Gill Montgomery of The Amorettes. Black Star Riders will also play a small number of shows in November and December, including a headline slot at the Planet Rockstock Festival on December 1. These shows will be Johnson's last with the band. Johnson's latest solo album, Memoirs of an Uprising, was recorded during breaks in Black Star Riders' tour schedule over 2017 and early 2018, and ultimately became the launchpad for his fully focused career as a solo artist. The self-produced album was issued on Johnson's own Double Dragon Records imprint and was co-written with longtime friend Jim "Johnny Blade" Troglen.

Looking for the cheapest concert tickets for the show of Damon Johnson Tour 2023? If yes, then welcome to our portal offering a wide choice of either cheap of VIP tickets. Furthermore, we guarantee that here, you will definitely find so desired tickets for the performance of the Damon Johnson 2022 Tour dates you adore.

The show of Damon Johnson is worth seeing. You won’t regret because this talented person will gift you unforgettable emotions, help you forget about all problems and allow you to jump into the fantastic world of music for only one evening.

The primary target of our service is to offer Damon Johnson tour tickets for the show of your favorite singer at the most affordable price. You may be sure that choosing our ticket service, you will not overpay and get the entrance ticket for the incredible performance, you were waiting for so long. We know everything about the way how a professional ticket service should work. So, with us, you’ll get the lowest Damon Johnson ticket prices and the best places for the show.