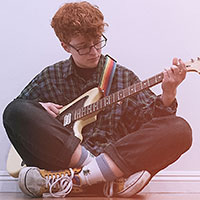 Cavetown will be performing an event in the next dates is right in your area. Buy tickets for your favorite performer or group and you will be able to visit his show already tomorrow!

Share with friends:
Updated: 12-02-2021
Robin Daniel Skinner known professionally as Cavetown, is an English singer-songwriter and YouTuber based in Cambridge. His style blends elements of indie rock, indie pop and bedroom pop with mellow, gentle ukulele ballads. As of February 2020, he has amassed over 3.3 million monthly streamers on Spotify. His YouTube channel, which he began in November 2012, sits at 1.2 million subscribers and 128.1 million video views. Skinner released his third studio album, Lemon Boy, in July 2018.

In 2016, Skinner released his second studio album, 16/04/16. The album includes a mix of "warm, melodic bedroom pop" and "lo-fi indie rock". In April 2017, whilst still at Sixth Form College, Skinner made it through to the final of the Cambridge Band Competition winning both Best Acoustic Act and the Kimberley Rew Award for Songwriting and going on to play at Strawberry Fair in June 2017. In 2018, he released his third album, Lemon Boy. The album's title track has amassed 24 million streams on Spotify and nearly 10 million views on YouTube as of September 2019.

In 2019, Skinner released five split singles which were later compiled into Animal Kingdom, a mixtape of ten tracks including covers and original singles with guest appearances from Sidney Gish, Simi, Chloe Moriondo and Spookyghostboy. He produced the single "prom dress" by mxmtoon, which has gained over 8 million streams on Spotify and has been used in over 100,000 videos on the video-sharing platform, TikTok. The single featured on mxmtoon's debut album the masquerade which was also fully produced by Skinner. Skinner performed on the Acoustic Stage at Victorious Festival in August 2019. He signed under Sire Records in 2019 where he released the single "Telescope" ahead of his upcoming album, later announced as Sleepyhead. Skinner embarked on a series of sold-out worldwide headlining tours in October 2019. He is yet to play at 31 venues in the US and 15 venues in the UK over the space of four months. He will be joined by Hunny and mxmtoon for a few shows in the UK tour, as well as Field Medic and Chloe Moriondo for a few shows in the US tour. In October 2019, Skinner announced his headlining tour along Australia's east coast which will take place in January 2020. In 2020, Skinner announced his upcoming major label debut album Sleepyhead for release in late March.

Looking for the cheapest concert tickets for the show of Cavetown Tour 2022? If yes, then welcome to our portal offering a wide choice of either cheap of VIP tickets. Furthermore, we guarantee that here, you will definitely find so desired tickets for the performance of the Cavetown 2021 Tour dates you adore.

The show of Cavetown is worth seeing. You won’t regret because this talented person will gift you unforgettable emotions, help you forget about all problems and allow you to jump into the fantastic world of music for only one evening.

The primary target of our service is to offer Cavetown tour tickets for the show of your favorite singer at the most affordable price. You may be sure that choosing our ticket service, you will not overpay and get the entrance ticket for the incredible performance, you were waiting for so long. We know everything about the way how a professional ticket service should work. So, with us, you’ll get the lowest Cavetown ticket prices and the best places for the show.