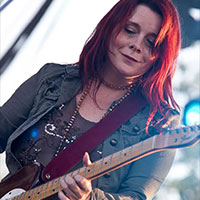 Carolyn Wonderland will be performing an event in the next dates is right in your area. Buy tickets for your favorite performer or group and you will be able to visit his show already tomorrow!

Share with friends:
Updated: 12-07-2022
Carolyn Wonderland is an American blues singer-songwriter and musician. She is married to comedian and writer A. Whitney Brown. In 1999, Wonderland moved to Austin, Texas; in 2001, she lost her apartment lease after her landlord became ill, and decided to live out of her van since she was spending more than 300 days a year on the road performing.

In February 2008, Wonderland released the CD "Miss Understood" on the Bismeaux Productions label, and the title song has been on the Top 50 of the 'Roots Music Report' chart since the album's release. Fans of Wonderland's music include Bob Dylan, and Ray Benson, founder of Asleep At The Wheel. Benson produced Miss Understood, and has been one of her songwriting collaborators. Wonderland credits several blues and Texas musicians as influences on her music. One notable influence is Austin singer/songwriter Terri Hendrix, as Wonderland covered two Hendrix songs, ("I Found the Lions" and "Throw My Love"), on Miss Understood.

Wonderland has been involved in a number of recordings, including several that were self-produced on independent labels. She was the lead singer fronting the band Imperial Monkeys. Wonderland released Bloodless Revolution in 2008, and is the primary singer on the Jerry Lightfoot's Band of Wonder Texistentialism CD with Lightfoot and Vince Welnick (Grateful Dead, Tubes.) Wonderland was a founding member of the Loose Affiliation of Saints and Sinners (with Papa Mali, Eldridge Goins, Guy Forsyth, and others), with several of her songs being featured on their Sessions from the Hotel San Jose Rm. 50 CD. She was also the lead guitarist in the all-girl, southern rock band Sis DeVille (other members include Shelley King, Sarah Brown, Lisa Pankratz, and Floramay Holliday), and a founding member of the Austin Volunteer Orchestra.

Wonderland appeared on Austin City Limits in 2008, and has had her music used on NBC's Homicide and Fox's Time of Your Life. She was a headlining artist at the annual Rochester International Jazz Festival summer 2009 at the Eastman Theatre and New York. In 2003, Wonderland opened the Sturgis Motorcycle Rally, after performing there for the previous ten years, singing the National Anthem with 'The Imperial Monkeys'. Wonderland also performs with the Imperial Golden Crown Harmonizers, raising money for local Austin charities, food banks, soup kitchens, homeless shelters, and on behalf of the legalization of marijuana. On April 6, 2018, Wonderland joined the legendary John Mayall's band as his first female lead guitarist in his 60+ year career.

The show of Carolyn Wonderland is worth seeing. You won’t regret because this talented person will gift you unforgettable emotions, help you forget about all problems and allow you to jump into the fantastic world of music for only one evening.

The primary target of our service is to offer Carolyn Wonderland tour tickets for the show of your favorite singer at the most affordable price. You may be sure that choosing our ticket service, you will not overpay and get the entrance ticket for the incredible performance, you were waiting for so long. We know everything about the way how a professional ticket service should work. So, with us, you’ll get the lowest Carolyn Wonderland ticket prices and the best places for the show.