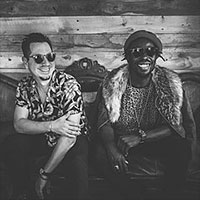 Black Pumas will be performing an event in the next dates is right in your area. Buy tickets for your favorite performer or group and you will be able to visit his show already tomorrow!

Share with friends:
Updated: 01-25-2022
Black Pumas is an American psychedelic soul duo based in Austin, Texas, consisting of singer Eric Burton and guitarist/producer Adrian Quesada. The group received its first Grammy Award nomination in 2020 for Best New Artist at the 62nd awards.

The duo formed in 2017 and released their debut album, Black Pumas, on June 21, 2019. They performed at South by Southwest in 2019 and won a best new band trophy at the 2019 Austin Music Awards. On November 20, 2019, they were nominated for a Grammy Award for Best New Artist. Quesada was a member of Latin funk band Grupo Fantasma when it won the Grammy Award for Best Latin Rock, Urban or Alternative Album for the 2010 album El Existential, and when it was previously nominated for the same award in 2008 for Sonidos Gold.

Through a mutual friend, Quesada connected with Burton, who had been a singer-songwriter in Austin since busking his way from Los Angeles in 2015. Quesada felt that Burton's vocals were a match for the retro-funk- and R&B-flavored tracks Quesada had been working on, and the two joined forces in 2018 as Black Pumas. Working out their material both in the studio and on-stage during a weekly residency at Austin's C-Boys Heart & Soul Bar, they signed a deal with ATO Records and released a pair of singles, "Black Moon Rising" and "Fire", in early 2019. Their acclaimed debut LP followed in June of that year and helped to earn the duo a Grammy nomination for Best New Artist.

The duo's self-titled debut album was called "perfectly realized" by The Guardian, while Pitchfork described the band's sound as "acutely cinematic", and Rolling Stone complimented frontman Eric Burton's "tireless, charismatic energy". Black Pumas performed "Colors" on Jimmy Kimmel Live! following their network TV debut on CBS This Morning along with a taping on season 45 of Austin City Limits. The band's single "Colors" later reached number one on AAA radio. In 2020, the band performed on The Ellen DeGeneres Show and the The Tonight Show Starring Jimmy Fallon, and embarked on tours of North America and Europe including festival additions at Coachella and Newport Folk Festival. In their hometown of Austin, Texas, Black Pumas became the first band to sell out four consecutive shows at Stubbs, one of the city's live venues, and on May 7, 2020, mayor Steve Adler proclaimed the date as Black Pumas Day.

Looking for the cheapest concert tickets for the show of Black Pumas Tour 2023? If yes, then welcome to our portal offering a wide choice of either cheap of VIP tickets. Furthermore, we guarantee that here, you will definitely find so desired tickets for the performance of the Black Pumas 2022 Tour dates you adore.

The show of Black Pumas is worth seeing. You won’t regret because this talented person will gift you unforgettable emotions, help you forget about all problems and allow you to jump into the fantastic world of music for only one evening.

The primary target of our service is to offer Black Pumas tour tickets for the show of your favorite singer at the most affordable price. You may be sure that choosing our ticket service, you will not overpay and get the entrance ticket for the incredible performance, you were waiting for so long. We know everything about the way how a professional ticket service should work. So, with us, you’ll get the lowest Black Pumas ticket prices and the best places for the show.