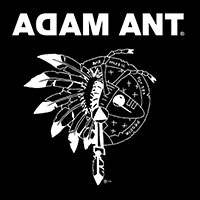 Adam Ant will be performing an event in the next dates is right in your area. Buy tickets for your favorite performer or group and you will be able to visit his show already tomorrow!

Share with friends:
Updated: 02-09-2023
Stuart Leslie Goddard, better known as Adam Ant is an English singer and musician. He gained popularity as the lead singer of new wave group Adam and the Ants and later as a solo artist, scoring 10 UK top ten hits from 1980 to 1983, including three UK No. 1 singles. He has also worked as an actor, appearing in over two dozen films and television episodes from 1985 to 2003.

Born in Marylebone, London, Ant began his musical career playing bass in the band Bazooka Joe. From 1977 to 1982 he performed as Adam and the Ants and their debut album Dirk Wears White Sox (1979) reached number one on the UK Independent Albums Chart. Prior to recording his second album as Adam and the Ants, he asked producer Malcolm McLaren to manage his band, who instead took his backing band to form Bow Wow Wow. Ant regrouped with new members, including Marco Pirroni to release his second album Kings of the Wild Frontier (1980). It reached number one in the UK Album Chart, spawned three hit singles and the album was the UK number one selling album in 1981 (and the 48th best seller in 1980) and won Best British Album at the 1982 Brit Awards. He released his third and final album with the group, Prince Charming (1981), which spawned two UK number one singles "Stand and Deliver" and "Prince Charming".

In 1982, he disbanded his group for a solo career retaining only Marco Pirroni as a bandmember and co-songwriter for later solo albums. His first solo album was Friend or Foe (1982), which the debut single "Goody Two-Shoes" reached number one in the UK and Australia in 1982 and became his first top 20 hit in the United States. The album reached number five on the UK Albums Chart and number 16 on the US Billboard Album Chart, becoming his most successful solo album. His next two solo albums Strip (1983) and Vive Le Rock (1985) were less commercially successful in the UK and US and were a noted stylistic departure of his earlier rock albums being more grounded in pop and dance. During this time, Ant also began to focus on an acting career performing on stage and in television and movie roles throughout the 1980s and 1990s. He released his fourth solo album Manners & Physique (1990) which was produced by André Cymone and featured a Minneapolis sound. Despite the US Top 20 success of the single "Room At The Top" from that album, Ant was dropped from MCA Records and the fully recorded Persuasion (1991) was shelved and never officially released. He signed with Capitol Records to release Wonderful (1995), which featured more acoustic songs than his previous albums. The single "Wonderful" became Ant's third US Top 40 hit single. After a long break from music, Ant returned with his album Adam Ant Is the Blueblack Hussar in Marrying the Gunner's Daughter (2013) which was released on his own label Blueblack Hussar Records. Despite the independent self-release, the album reached number 25 on the UK Albums Chart, only one place lower than Wonderful, which was released 18 years earlier.

Since 2010, Ant has undertaken an intense reactivation of his musical career, performing live regularly in his hometown of London and beyond, recording and releasing a new album and completing six full-length UK national tours, four US national tours, and two Australian tours and with a fifth US tour scheduled and a further album completed and awaiting release.

Looking for the cheapest concert tickets for the show of Adam Ant Tour 2024? If yes, then welcome to our portal offering a wide choice of either cheap of VIP tickets. Furthermore, we guarantee that here, you will definitely find so desired tickets for the performance of the Adam Ant 2023 Tour dates you adore.

The show of Adam Ant is worth seeing. You won’t regret because this talented person will gift you unforgettable emotions, help you forget about all problems and allow you to jump into the fantastic world of music for only one evening.

The primary target of our service is to offer Adam Ant tour tickets for the show of your favorite singer at the most affordable price. You may be sure that choosing our ticket service, you will not overpay and get the entrance ticket for the incredible performance, you were waiting for so long. We know everything about the way how a professional ticket service should work. So, with us, you’ll get the lowest Adam Ant ticket prices and the best places for the show.