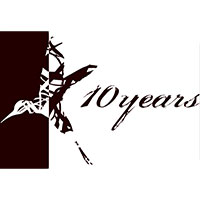 10 Years will be performing an event in the next dates is right in your area. Buy tickets for your favorite performer or group and you will be able to visit his show already tomorrow!

Share with friends:
Updated: 02-09-2023
10 Years is an American alternative metal band, formed in Knoxville, Tennessee, United States, in 1999. The band consists of lead vocalist Jesse Hasek, guitarist Brian Vodinh, guitarist Matt Wantland, bassist Chad Grennor, and drummer Luke Narey. The group has gone through multiple line-up changes since their inception, with Vodinh and Wantland being the only remaining founding members. To date, they have released eight studio albums, their most recent being (How to Live) As Ghosts, released on October 27, 2017.

From Birth to Burial is 10 Years's seventh studio album, released on April 21, 2015. Their first single Miscellanea was released on February 13, 2015. The band have been on tour supporting the album touring with Breaking Benjamin for the American leg of the tour and Dead Letter Circus for the Australian leg. At the end of 2016, the group signed to Mascot Label Group.

The band's eighth studio album titled (How to Live) as Ghosts, and recorded with producer, Nick Raskulinecz, was released on October 27, 2017. The first single, "Novacaine", was released prior in August, while the second single, "Burnout" followed in April. Chad Grennor joined 10 Years as the new bassist in 2018, playing his first show with the band in January. Chad is well known around the music scene in the band's hometown of Knoxville, Tennessee, where he is the rhythm guitarist and co-vocalist in the band Annandale. Chad is also the bassist for the band Brave the Royals. Originally a nuclear engineer, Chad's true passion is music.

Luke Narey joined the band for their European tour for the fall of 2018 following drummer Kyle Mayer’s departure from the band. Narey is known from the Bloomington, Indiana-based band Blue Rising, who he continues to perform with, as well as playing with the band Brave the Royals for a number of shows as a fill-in. Mayer indicated in a Facebook post from early August 2018 that he was not leaving on his own accord and thanked his fans while vowing to continue working in music to share with his them due to his undiminished passion for music.

The band's genre has mainly been termed by journalists as alternative metal; however, they've also been categorized under post-grunge and progressive metal. The band are heavily influenced by Tool, with critics comparing singer Jesse Hasek's singing to that of Tool vocalist Maynard James Keenan's.

Looking for the cheapest concert tickets for the show of 10 Years Tour 2024? If yes, then welcome to our portal offering a wide choice of either cheap of VIP tickets. Furthermore, we guarantee that here, you will definitely find so desired tickets for the performance of the 10 Years 2023 Tour dates you adore.

The show of 10 Years is worth seeing. You won’t regret because this talented person will gift you unforgettable emotions, help you forget about all problems and allow you to jump into the fantastic world of music for only one evening.

The primary target of our service is to offer 10 Years tour tickets for the show of your favorite singer at the most affordable price. You may be sure that choosing our ticket service, you will not overpay and get the entrance ticket for the incredible performance, you were waiting for so long. We know everything about the way how a professional ticket service should work. So, with us, you’ll get the lowest 10 Years ticket prices and the best places for the show.