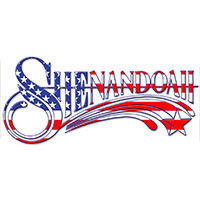 Shenandoah will be performing an event in the next dates is right in your area. Buy tickets for your favorite performer or group and you will be able to visit his show already tomorrow!

Share with friends:
Updated: 12-07-2022
Shenandoah is an American country music band founded in Muscle Shoals, Alabama, in 1984 by Marty Raybon (lead vocals, acoustic guitar), Ralph Ezell (bass guitar, backing vocals), Stan Thorn (keyboards, backing vocals), Jim Seales (lead guitar, backing vocals), and Mike McGuire (drums, background vocals). Thorn and Ezell left the band in the mid-1990s, with Rocky Thacker taking over on bass guitar; Keyboardist Stan Munsey joined the line up in 1995, until his departure in 2018. The band split up in 1997 after Raybon left. Seales, Munsey, Thacker and McGuire reformed the band in 2000 with lead singer Brent Lamb, who was in turn replaced by Curtis Wright and then by Jimmy Yeary. Ezell rejoined in the early 2000s, and after his 2007 death, he was replaced by Mike Folsom. Raybon returned to the band in 2014. That same year, Jamie Michael replaced the retiring Jim Seales on lead guitar.

Shenandoah has released nine studio albums, of which two have been certified gold by the Recording Industry Association of America. The band has also charted twenty-six singles on the Billboard Hot Country Songs charts, including the Number One hits "The Church on Cumberland Road," "Sunday in the South" and "Two Dozen Roses" from 1989, "Next to You, Next to Me" from 1990, and "If Bubba Can Dance (I Can Too)" from 1994. The late 1994-early 1995 single "Somewhere in the Vicinity of the Heart," which featured guest vocals from Alison Krauss, won both artists a Grammy Award for Best Country Performance by a Duo or Group with Vocal.

Yeary and McGuire co-wrote a song entitled "You Never Know" as a tribute to Ezell. Darryl Worley recorded this song on his 2009 album Sounds Like Life, saying that he considered it "dead-on" for him. Shenandoah has continued to tour in 2009 and 2010 with Yeary on lead vocals, mostly playing at community festivals and county fairs. Yeary engaged country-gospel singer Sonya Isaacs (of The Isaacs) in November 2009. They have since become married and had one son in 2011. He has also written songs for other artists, including "In Another World" by Joe Diffie, "Why Wait" by Rascal Flatts, "Summer Thing" by Troy Olsen, "I'm Gonna Love You Through It" by Martina McBride, and "I Drive Your Truck" by Lee Brice. Yeary left in 2011, with Doug Stokes taking over on lead vocals, and Chris Lucas (Roach) on bass.

In August 2014, Marty Raybon re-joined as lead singer of the band, replacing Doug Stokes. At the time of his rejoining, the band consists of Raybon, McGuire, Munsey, and bassist Chris Lucas, later replaced by Paul Sanders. In October, Jamie Michael replaced the retiring Jim Seales on lead guitar. In 2016, Brad Benge joined the group on bass and baritone vocals, until his departure in 2018.

In February 2016, Shenandoah signed with Johnstone Entertainment for management representation. "The confidence that you place in a person should be based on the true understanding you have of their integrity, wisdom and vision. We feel we made the right decision with Cole Johnstone as our manager as we set our sights on the future." said lead vocalist Marty Raybon.

The band's sound is defined by country, bluegrass and gospel influences. John Bush of Allmusic calls Shenandoah "one of the first groups to rebel against the urban cowboy image of the '80s and lead the way to the new traditionalism of the '90s." Marty Raybon's vocals have been described as "blend the soulfulness of rhythm and blues with the lonely intensity of great country music." Alanna Nash wrote that the band's work relies on "sentimental lyrics revolving around the Southern experience," and said that Shenandoah "forged its very commercial reputation on a soulful gospel-and-bluegrass blend, with lead singer Marty Raybon's searing sincerity making even the tritest songs about small-town Southern values and attitudes memorable." Logan Smith of the St. Petersburg Times said that the band has "woven together a highly polished sound built around precision musicianship and pristine harmonies, very much a hybrid of Raybon's bluegrass roots." Writing for the Associated Press, Joe Edwards cited the variety of sounds on the band's second album, referring to "The Church on Cumberland Road" as a "spirited up-tempo," also making note of the Southern imagery in "Sunday in the South" and the "truest country music tradition" of the ballad "She Doesn't Cry Anymore."

Looking for the cheapest concert tickets for the show of Shenandoah Tour 2023? If yes, then welcome to our portal offering a wide choice of either cheap of VIP tickets. Furthermore, we guarantee that here, you will definitely find so desired tickets for the performance of the Shenandoah 2022 Tour dates you adore.

The show of Shenandoah is worth seeing. You won’t regret because this talented person will gift you unforgettable emotions, help you forget about all problems and allow you to jump into the fantastic world of music for only one evening.

The primary target of our service is to offer Shenandoah tour tickets for the show of your favorite singer at the most affordable price. You may be sure that choosing our ticket service, you will not overpay and get the entrance ticket for the incredible performance, you were waiting for so long. We know everything about the way how a professional ticket service should work. So, with us, you’ll get the lowest Shenandoah ticket prices and the best places for the show.