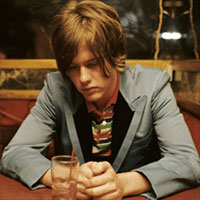 Johnathan Rice will be performing an event in the next dates is right in your area. Buy tickets for your favorite performer or group and you will be able to visit his show already tomorrow!

Share with friends:
Updated: 01-31-2023
Johnathan Rice is a Scottish-American singer-songwriter. He frequently collaborates with Jenny Lewis. His first album, Trouble is Real, was released on Reprise Records on April 26, 2005. His follow-up, Further North, was released by Reprise on September 11, 2007. He has also worked as a producer on Jenny Lewis' Acid Tongue (2008) and Voyager (2014), and as a songwriter on the self-titled record by Nashville band The Apache Relay. He has served as a session and live musician with Elvis Costello on 2008's Momofuku). In 2010, he released a collaborative album "I'm Having Fun Now" with Jenny Lewis, as Jenny and Johnny. In 2013-14, Rice and Lewis scored and wrote seven original songs for the movie Song One (2014), starring Anne Hathaway.

Rice moved from Virginia to New York City at the age of eighteen with 1,000 copies of the Heart and Mind EP and the intention of launching his career as a singer/songwriter. He arrived in New York two days before the attacks on the World Trade Center on September 11, 2001. Imagery of the attacks and their aftermath appear in the lyrics of several of the songs on Trouble Is Real, including "City on Fire", "Put Me in Your Holy War" and "Salvation Day".

The album failed to break into the charts but was a favorite of TV music-supervisors, leading to high-profile appearances of songs on The OC (Rice's song "So Sweet" is featured on the OC Mix 2) and Grey's Anatomy. Rice has cited Neil Young, Gram Parsons, Colin Blunstone, Spoon, Pixies, and Pavement among his influences.

Rice toured Trouble Is Real extensively, mostly as a support act for acts such as Jesse Harris, Mason Jennings, Starsailor, Martha Wainwright, Jenny Lewis and R.E.M. The group, introduced to Rice's music through guitarist Peter Buck selected him to support them in London's Hyde Park in July 2005 in front of a crowd of 80,000 people. Rice played the concert with his touring band, Death Valley, a lap steel and harmony group that featured Neal Casal (who would go on to found the Cardinals with Ryan Adams) and "Farmer" Dave Scher of the Beachwood Sparks and All Night Radio. Rice's appearance at the Hyde Park concert and another performance at the 100 Club are captured on film in the 2005 documentary Johnathan Rice and Death Valley: Live in London.

Looking for the cheapest concert tickets for the show of Johnathan Rice Tour 2024? If yes, then welcome to our portal offering a wide choice of either cheap of VIP tickets. Furthermore, we guarantee that here, you will definitely find so desired tickets for the performance of the Johnathan Rice 2023 Tour dates you adore.

The show of Johnathan Rice is worth seeing. You won’t regret because this talented person will gift you unforgettable emotions, help you forget about all problems and allow you to jump into the fantastic world of music for only one evening.

The primary target of our service is to offer Johnathan Rice tour tickets for the show of your favorite singer at the most affordable price. You may be sure that choosing our ticket service, you will not overpay and get the entrance ticket for the incredible performance, you were waiting for so long. We know everything about the way how a professional ticket service should work. So, with us, you’ll get the lowest Johnathan Rice ticket prices and the best places for the show.