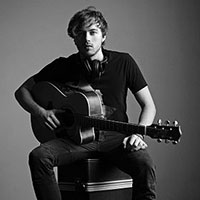 Joe Robinson will be performing an event in the next dates is right in your area. Buy tickets for your favorite performer or group and you will be able to visit his show already tomorrow!

Share with friends:
Updated: 05-25-2022
Joe Robinson is an Australian guitar player and vocalist. A largely self-taught musician from Temagog, NSW, he is best known for his virtuoso guitar abilities and for winning the 2008 season of Australia's Got Talent.

In September 2010 Joe performed at Live on the Green in Nashville, TN alongside "The Wailers." Then in November, Robinson began "The Houdini tour" in Europe traveling through Germany, Czech Republic, Croatia, Slovakia, Austria, Hungary, Serbia and Italy. From the beginning, Robinson’s concept of this tour was to "escape the expectations" of him as a performer. He added vocal selections and brought along two musicians from the United States - bassist Bernard Harris and drummer Marcus Hill. After the monthlong acclaimed European performances, Robinson continued on to Japan for a stint of highly anticipated solo appearances in Tokyo and Osaka through mid-December. His first time in Japan proved to be widely lauded and well received for the 19-year-old musician. From those shows he landed a recording contract with P-Vine Records. Returning to his Australian homeland for the holidays, Robinson resumed his tour on 5 January in Eumundi and ended it on 29 January in Melbourne.

Joe returned to Australia in late 2012 for a series of headline dates and festivals, which included the Festival of the Sun in Port Maquarie, NSW. Robinson released his new EP through the independent distributor MGM, to coincide with the tour.

Robinson spent the majority of 2013 touring North America. Headlining clubs all over the North East as well as stints in Texas and the West Coast. After a short headlining run in China and Japan, he spent most of the summer playing festivals including Canada ‘s Ottawa Bluesfest (alongside The Black Keys and Dixie Chicks), Nashville's Live On The Green with Robert Randolph and Fender's celebration event leading up to the Eric Clapton Crossroads Guitar Festival at Madison Square Garden

In 2014, Joe released the “Gemini Vol.1” EP,. Although a strong vocal performance carries the EP, it is his driving guitar - a mix of blues, rock, jazz, and R&B all his own - that ties it to his previous releases. Robinson played almost every instrument on the self-produced EP, lending a level of intimacy to the album. Following up “Gemini Vol.2” was released October 31, 2015. Joe played all the instruments, produced and mixed the 4 song EP. Touring extensively with his solo show in 2016, Joe also collaborated with ‘Guitar Army’, a trio of triple threat guitar players, writers and singers; Joe, Robben Ford and Lee Roy Parnell. 2017 sees Joe working on his much anticipated 4th full length album.

Looking for the cheapest concert tickets for the show of Joe Robinson Tour 2023? If yes, then welcome to our portal offering a wide choice of either cheap of VIP tickets. Furthermore, we guarantee that here, you will definitely find so desired tickets for the performance of the Joe Robinson 2022 Tour dates you adore.

The show of Joe Robinson is worth seeing. You won’t regret because this talented person will gift you unforgettable emotions, help you forget about all problems and allow you to jump into the fantastic world of music for only one evening.

The primary target of our service is to offer Joe Robinson tour tickets for the show of your favorite singer at the most affordable price. You may be sure that choosing our ticket service, you will not overpay and get the entrance ticket for the incredible performance, you were waiting for so long. We know everything about the way how a professional ticket service should work. So, with us, you’ll get the lowest Joe Robinson ticket prices and the best places for the show.