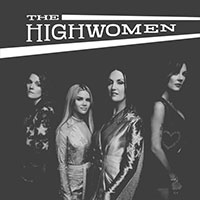 Highwomen will be performing an event in the next dates is right in your area. Buy tickets for your favorite performer or group and you will be able to visit his show already tomorrow!

Share with friends:
Updated: 12-05-2022
The Highwomen is a country music supergroup composed of Brandi Carlile, Natalie Hemby, Maren Morris, and Amanda Shires, formed in 2019. The group's self-titled debut album was released on September 6, 2019, by Elektra Records and was produced by Dave Cobb.

The group made their live debut on April 1, 2019 at Loretta Lynn's 87th birthday concert held at the Bridgestone Arena in Nashville. There, Natalie Hemby was officially revealed as the final member and the quartet performed "It Wasn't God Who Made Honky Tonk Angels". Their debut single, "Redesigning Women", and its associated music video featuring female artists including Tanya Tucker, Cam, Lauren Alaina, Cassadee Pope and Wynonna Judd was released on 19 July 2019, with their self-titled debut album (set for release on September 6) becoming available for pre-order on the same day. The song was promoted by country singer Dierks Bentley who released a comedic reading of the lyrics to his YouTube Channel which received praise from Carlile and Morris. Their second single, "Crowded Table", written by band member Hemby and Lori McKenna, was released on July 26, 2019.

In July 2019, the Highwomen performed their first ever full live set at the 60th annual Newport Folk Festival, previewing songs from their upcoming album including "If She Ever Leaves Me", written by Shires, her husband Jason Isbell and Chris Thompkins. With Carlile on lead vocals, Isbell described it as "the first gay country song" which elicited applause from the audience. Other songs performed included "My Only Child", an ode to "suburban moms" performed by Hemby who wrote the track with Shires and Miranda Lambert, "Loose Change", a nod to 70s country written by Morris, Daniel Layus of Augustana, and Maggie Chapman, featuring Morris on lead vocals and "Cocktail and a Song" which was written solely by Shires in honor of her father. Carlile later invited the rest of the Highwomen to join her during her headlining set where, as they originally intended, the group performed alongside other female artists including Amy Ray, Courtney Marie Andrews, Dolly Parton, Jade Bird, Judy Collins, Linda Perry, Lucy Dacus, Our Native Daughters, Sheryl Crow, The First Ladies of Bluegrass, and Yola Carter. Shires said the plan was always to debut their music at Newport with Dolly Parton. The band wore custom suits by Manuel.

Their cover of "The Chain" by Fleetwood Mac from the soundtrack of the movie The Kitchen debuted during the film's first trailer and was officially released on August 2, 2019. The title track of their self-titled debut album was released on August 13, 2019. Written by Carlile and Shires with Jimmy Webb, the original writer of "Highwayman", the track that originally inspired the Highwomen's formation, it tells the story of various women throughout history and features guest vocals from British country soul singer Yola Carter and backing vocals from Sheryl Crow. The song is a classic answer song. The band recorded 15 songs, but only 12 tracks made it on the album. Songwriters included the aforementioned Jimmy Webb, Rodney Clawson, Maggie Chapman, Lori McKenna, Jason Isbell, Peter Levin, Miranda Lambert, Ray LaMontagne, among many others. Many of the songs flip gender roles, with additions of characters like refugee, preacher, Freedom Rider, and a healer, compared to the characters drawn by the Highwaymen songs.

Looking for the cheapest concert tickets for the show of Highwomen Tour 2023? If yes, then welcome to our portal offering a wide choice of either cheap of VIP tickets. Furthermore, we guarantee that here, you will definitely find so desired tickets for the performance of the Highwomen 2022 Tour dates you adore.

The show of Highwomen is worth seeing. You won’t regret because this talented person will gift you unforgettable emotions, help you forget about all problems and allow you to jump into the fantastic world of music for only one evening.

The primary target of our service is to offer Highwomen tour tickets for the show of your favorite singer at the most affordable price. You may be sure that choosing our ticket service, you will not overpay and get the entrance ticket for the incredible performance, you were waiting for so long. We know everything about the way how a professional ticket service should work. So, with us, you’ll get the lowest Highwomen ticket prices and the best places for the show.