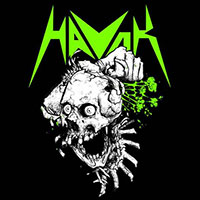 Havok will be performing an event in the next dates is right in your area. Buy tickets for your favorite performer or group and you will be able to visit his show already tomorrow!

David Sanchez formed Havok with classmate and drummer, Haakon Sjoegren. The duo searched for a lead guitarist by putting up fliers around the Denver area, and local guitarist Shawn Chavez joined the band. Eventually, they rounded out their first lineup with Marcus Corich on bass, and in 2004, Havok recorded their first demo, "Thrash Can". In 2005, they self-released another EP, "Murder by Metal". By 2007, Tyler Cantrell had taken up the role as bassist, and Rich Tice on drums. On September 19, with this new line-up in place, Havok released their first self-released EP, "Pwn 'Em All". Tyler's brother, Justin Cantrell - also a bassist, replaced him for several tours in support of the EP.

After over a year of heavy touring, Havok returned home to Denver with plans to record their next album. Havok was invited to open for Testament's 'Dark Roots of Thrash' tour at their Denver show after Overkill was forced to drop from the tour due to singer Bobby "Blitz" Ellsworth falling ill. Fans were introduced to Havok's new bassist, Mike Leon (previously of Tampa, FL metallers The Absence), after Jesse left the band to spend time with family. Havok began recording their newest album in the spring of 2013. Unnatural Selection was released on June 25, 2013, and in its first week charted on the Billboard top 200 at No. 154 selling over 2,500 copies. Shortly after the release, the band went to Bogota, Colombia to play the Rock Al Parque festival, playing to an estimated 45,000 people. The festival also included Cannibal Corpse and Symphony X. The band set out on a 50 plus day headline tour to support "Unnatural Selection" with dates that lead up to the Montreal, Canada festival Heavy MTL on August 11. Unnatural Selection was the band's last release on Candlelight Records and on July 11, the band signed with Century Media Records.

On April 30, 2015, founding lead guitarist Shawn Chavez died at age 30. On September 22, 2015, the band announced that they had parted ways with bassist Mike Leon (who had joined Soulfly), and had replaced him with Nick Schendzielos from Cephalic Carnage and Job for a Cowboy. That same month, it was announced that Havok had been working on their fourth studio album, Conformicide, which was released on March 10, 2017.

On May 17, 2018, the band announced the dates for the North American tour beginning on July 13 and ending on August 5. Jungle Rot and Extinction A.D. were also seen along. In a July 2018 interview with Sonic Perspectives, Sanchez stated that Havok was going to "stop touring soon" and begin writing a new album, which he had hoped would be released by the summer of 2019. The album, V, is expected on May 1, 2020 and will be their first release with new bassist Brandon Bruce.

Looking for the cheapest concert tickets for the show of Havok Tour 2023? If yes, then welcome to our portal offering a wide choice of either cheap of VIP tickets. Furthermore, we guarantee that here, you will definitely find so desired tickets for the performance of the Havok 2022 Tour dates you adore.

The show of Havok is worth seeing. You won’t regret because this talented person will gift you unforgettable emotions, help you forget about all problems and allow you to jump into the fantastic world of music for only one evening.

The primary target of our service is to offer Havok tour tickets for the show of your favorite singer at the most affordable price. You may be sure that choosing our ticket service, you will not overpay and get the entrance ticket for the incredible performance, you were waiting for so long. We know everything about the way how a professional ticket service should work. So, with us, you’ll get the lowest Havok ticket prices and the best places for the show.