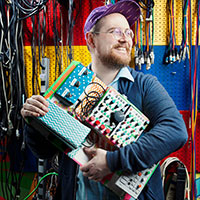 Dan Deacon will be performing an event in the next dates is right in your area. Buy tickets for your favorite performer or group and you will be able to visit his show already tomorrow!

Share with friends:
Updated: 07-05-2022
Dan Deacon is an American composer and electronic musician based in Baltimore, Maryland. Deacon is renowned for his live shows, where large-scale audience participation and interaction is often a major element of the performance. Since 2003, he has released five solo albums, including 2015's Gliss Riffer, released by Domino Records. His work as a film composer includes the original soundtracks for 2017's Rat Film and 2018's Time Trial, both released by Domino Soundtracks. His next album, titled Mystic Familiar, was released January 31, 2020 on Domino.

Spiderman of the Rings was Deacon's first commercially distributed full-length album, released by Carpark Records in May 2007. The album was well received and was included in the Best New Music section of Pitchfork." The album was ranked as number 24 on the website's "Top 50 Albums of 2007". Spiderman of the Rings marked the beginning of Deacon's body of recorded work as an electronic-pop musician; Deacon has stated the success of this record "completely changed my life in every possible way."

The collaborative video-art piece Ultimate Reality was released as a DVD in November 2007 by Carpark Records and marked a return to composing music for others to perform. The pieces for percussion and electronics were performed by Jeremy Hyman of Ponytail and Kevin Omeara of Videohippos. The sonic pieces were set to collaged and heavily altered video created by Deacon's long time friend and collaborator Jimmy Joe Roche.

Deacon's next album, entitled Bromst, was released on March 24, 2009. It was produced by Chester Gwazda at Snow Ghost Studios in Whitefish, Montana and features live instruments including player piano and a variety of percussion instruments. The album was well received; Pitchfork gave it an 8.5/10, and it placed it into the "best new music" section.

His album America was released on August 28, 2012, on Domino Records in the US. Deacon has described the album as representing his conflicted feelings toward the country and world he calls home: "The inspiration for the music was my love of cross-country travel, seeing the landscapes of the United States, going from east to west and back again over the course of seasons. "The lyrics are inspired by my frustration, fear and anger towards the country and world I live in and am a part of. As I came closer to finishing the album these themes began to show themselves more frequently and greater clarity. There seemed no better world to encapsulate both inspirations than the simple beauty found in the word America."

Gliss Riffer was released on Domino Records on February 25, 2015. Deacon describes the album title as “something that auto-correct wants to make sure that no one can actually type.” The album was produced by Deacon alone, who notes that he created the album “trying to confront my own anxieties or insecurities and the stresses in my life.” Gliss Riffer yielded the singles "Feel the Lightning" and "Learning to Relax," as well as a viral video animated in the Exquisite corpse style for "When I Was Done Dying," produced by Adult Swim and featuring the work of nine different animators. Gliss Riffer received four-star reviews from both The Guardian and AllMusic. In his A- review of the album for Consequence of Sound, Derek Staples noted that "the universal motifs of his discography are now refracted through a more personal lens," and praised the record's "new lyrical depth."

In 2017, Deacon released a 10th-anniversary edition of Spiderman of the Rings that also included the soundtrack to 2007's Ultimate Reality. Deacon produced and co-wrote the album Riddles by Ed Schrader's Music Beat, released March 2, 2018 on Carpark Records. Writing for NPR's "All Songs Considered," Bob Boilen described Riddles as "a fascinating piece of work that is both ugly and beautiful, often at the same time," likening its sound to late-1970s records by Suicide and Pere Ubu. Nina Corcoran noted in Pitchfork that "You can hear Deacon’s style, especially that of 2012’s America, all over this album: the gleeful piano fluttering in 'Riddles,' the manic percussion buried in fuzz on 'Dizzy Devil,' the thick wall of synth on “Kid Radium.'”

Deacon's fifth studio album, Mystic Familiar, was released on January 31, 2020. A first video from the album, for the song "Sat By a Tree" starring Aparna Nancherla, was released October 29, 2019. The second single from Mystic Familiar, "Become a Mountain," was released on January 13, 2020 with a video by animation studio Rapapawn. In his 4-star review for AllMusic, Paul Simpson characterized Mystic Familiar as Deacon's return to "majestically arranged synth pop," characterizing its arrangements as "driving and full of excitement" and finding the album's lyrical themes of nature and inner peace "encouraging and empowering without relying on self-help clichés." For Under the Radar, Scott Dransfield noted that Mystic Familiar is "far and away his most personal work yet," and concluded that "the best thing about Mystic Familiar is how the beautiful composition of the music reinforces the power of the lyrics' message."

Looking for the cheapest concert tickets for the show of Dan Deacon Tour 2023? If yes, then welcome to our portal offering a wide choice of either cheap of VIP tickets. Furthermore, we guarantee that here, you will definitely find so desired tickets for the performance of the Dan Deacon 2022 Tour dates you adore.

The show of Dan Deacon is worth seeing. You won’t regret because this talented person will gift you unforgettable emotions, help you forget about all problems and allow you to jump into the fantastic world of music for only one evening.

The primary target of our service is to offer Dan Deacon tour tickets for the show of your favorite singer at the most affordable price. You may be sure that choosing our ticket service, you will not overpay and get the entrance ticket for the incredible performance, you were waiting for so long. We know everything about the way how a professional ticket service should work. So, with us, you’ll get the lowest Dan Deacon ticket prices and the best places for the show.