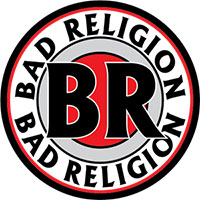 Bad Religion will be performing an event in the next dates is right in your area. Buy tickets for your favorite performer or group and you will be able to visit his show already tomorrow!

Share with friends:
Updated: 08-10-2022
Bad Religion is an American punk rock band that formed in Los Angeles, California in 1980. The band's lyrics cover topics related to religion, politics, and science. Musically, they are noted for their melodic sensibilities and extensive use of three-part vocal harmonies. The band has experienced multiple line-up changes, with singer Greg Graffin being the band's only constant member, though fellow founding members Jay Bentley and Brett Gurewitz have since rejoined, and guitarist Brian Baker has performed with the group since 1994. The most recent additions to the band are guitarist Mike Dimkich and drummer Jamie Miller, who joined in 2013 and 2015 respectively. To date, Bad Religion has released seventeen studio albums, two live albums, three compilation albums, three EPs, and two live DVDs. They are considered to be one of the best-selling punk rock acts of all time, having sold over five million albums worldwide.

By the time they were signed to Atlantic Records in 1993, Bad Religion had built an underground following with their early albums, including Suffer (1988), No Control (1989), Against the Grain (1990) and Generator (1992). The band first reached substantial commercial success with their seventh studio album and Atlantic debut Recipe for Hate (1993), which peaked at number 14 on Billboard's Heatseekers chart, and spawned one of their most popular songs "American Jesus". Recipe for Hate was followed a year later by Stranger than Fiction (1994), which spawned their biggest hits "Infected" and the re-recorded version of "21st Century (Digital Boy)", and was certified gold in both the United States and Canada. Shortly before the release of Stranger than Fiction, Gurewitz left Bad Religion to run his label Epitaph on a full-time basis (in response to the success of the label's then-artists the Offspring and Rancid), and was replaced by Brian Baker. Since Gurewitz's return to the band and their split with Atlantic in 2001, they have undergone a resurgence in popularity, with their sixteenth studio album True North (2013) becoming Bad Religion's first album to crack the top 20 on the Billboard 200 chart, where it peaked at number 19. The band's seventeenth and most recent studio album, Age of Unreason, was released on May 3, 2019.

Bad Religion was formed in Los Angeles, California in 1980 by high school students Greg Graffin, Jay Bentley, Jay Ziskrout, and Brett Gurewitz. Their first public performance was playing six or eight songs at a Fullerton, California, or Santa Ana, California, warehouse opening for Social Distortion. Their first official show was on November 11, 1980, at Joey Kills Bar in Burbank, California. In 1981, the band released their initial eponymous album on the newly formed label, Epitaph Records, which was and continues to be managed and owned by Gurewitz. Also in 1981, the band began recording their first full-length album, How Could Hell Be Any Worse? During the recording of this album, drummer Jay Ziskrout quit the band, and was replaced by Peter Finestone. Released in 1982, How Could Hell Be Any Worse? was also distributed by the band under the Epitaph label, and sold roughly 12,000 copies.

On February 14, 2018, vocalist Greg Graffin posted a picture of himself with guitarist Brett Gurewitz in the studio on Twitter, and tweeted, "New songs in the pipeline"; this post indicated that Bad Religion had been working on their seventeenth studio album. Speculation about the album resurfaced in April of that year when Gurewitz and guitarist Brian Baker posted pictures from the studio on their respective Instagram accounts. On June 20, 2018, the band released their first single in five years "The Kids Are Alt-Right".

Despite earlier reports that Bad Religion had been in the studio by mid-2018, and the fact that they had already released a new song, Gurewitz told Los Angeles Times in July 2018 that, "We're writing for a new album, recording this fall or late summer. No release date announced yet, but we should have an album's worth of 'Fuck Trump' songs pretty soon. It's exactly what we need." On February 26, 2019, Bad Religion announced Age of Unreason as the title of their seventeenth studio album, which was released on May 3, and the album's lead single "Chaos from Within" was premiered.

Bad Religion has been described as punk rock, skate punk and melodic hardcore. The band's major influences stemmed from late 1970s punk acts like the Ramones, the Germs, the Sex Pistols and the Clash, along with such early 1980s American hardcore bands as Black Flag, Minor Threat, and the Circle Jerks. Unlike many other hardcore bands of the era, they also acknowledged proto-punk bands like the New York Dolls, MC5 and Iggy Pop. Even more unusual for a band of the scene that spawned them, they were also informed by such new wavers as Elvis Costello, the Jam, and Nick Lowe, as well as authors like Jack Kerouac. The Beatles were also a huge influence on Bad Religion. The band said the Beatles were about the only band everyone in Bad Religion really liked. Reviewers have repeatedly cited an upbeat and positive tone to both the melody and lyrics, even when dealing with dark topics.

Greg Graffin called his influences "pop-sounding rock tunes that were not necessarily commercial." Brett Gurewitz acknowledges attempting to emulate Germs singer Darby Crash early on in Bad Religion's lyrical style. "He wrote some intelligent stuff, and didn't shy away from the vocabulary, which I thought was cool." In addition to their use of unusually sophisticated vocabulary for a punk band, Bad Religion is also known for their frequent use of vocal harmonies. They took their cues from the Adolescents, in the way that they used three-part harmonies. Bassist Jay Bentley says, "Seeing the Adolescents live, it was so brilliant. So, in a way, the Adolescents influenced us into saying we can do it, too, because look, they're doing it."

Looking for the cheapest concert tickets for the show of Bad Religion Tour 2023? If yes, then welcome to our portal offering a wide choice of either cheap of VIP tickets. Furthermore, we guarantee that here, you will definitely find so desired tickets for the performance of the Bad Religion 2022 Tour dates you adore.

The show of Bad Religion is worth seeing. You won’t regret because this talented person will gift you unforgettable emotions, help you forget about all problems and allow you to jump into the fantastic world of music for only one evening.

The primary target of our service is to offer Bad Religion tour tickets for the show of your favorite singer at the most affordable price. You may be sure that choosing our ticket service, you will not overpay and get the entrance ticket for the incredible performance, you were waiting for so long. We know everything about the way how a professional ticket service should work. So, with us, you’ll get the lowest Bad Religion ticket prices and the best places for the show.