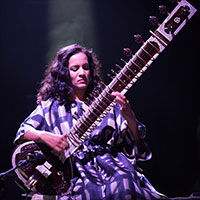 Anoushka Shankar will be performing an event in the next dates is right in your area. Buy tickets for your favorite performer or group and you will be able to visit his show already tomorrow!

Share with friends:
Updated: 01-27-2023
Anoushka Shankar is an Indian sitar player and composer. Her father is Ravi Shankar, her mother is Sukanya Rajan. She is the half-sister of Norah Jones.

Anoushka began training on the sitar with her father Ravi at the age of seven. As part of her training, she began accompanying him on the tanpura at his performances from the age of ten, soaking up the music and becoming acclimated to the stage. Anoushka gave her first public sitar performance on 27 February 1995 at the age of 13, at Siri Fort in New Delhi as part of her father's 75th birthday celebration concert. For this solo debut, she was accompanied by tabla maestro Zakir Hussain. Her first experience in the recording studio came that same year when Angel Records released a special four-CD box set called In Celebration, to mark her father's birthday. By the age of fourteen, she was accompanying her father at concerts around the world. At fifteen, she assisted her father on the landmark album Chants of India, produced by George Harrison. Under both their guidance, she was in charge of notation and eventually of conducting the performers who took part in the record. After this experience, the heads of Angel Records came to her parents' home to ask to sign her, and Anoushka signed her first exclusive recording contract with Angel/EMI when she was sixteen.

In 2011 Shankar signed with record label Deutsche Grammophon as an exclusive artist. This marked the beginning of a prolific recording and creative period for Shankar, during which time she continued to refine the sitar sound and musical ideas she had become known for. She earned a third Grammy Award nomination in 2013 for Traveller, an exploration of the shared history between flamenco and Indian classical music, which was produced by Javier Limón and featured artists such as Buika, Pepe Habichuela and Duquende. As Shankar had begun to do with Rise, she created a specially handpicked ensemble of musicians with whom to perform this cross-genre music, and played over a hundred concerts worldwide in support of Traveller. In 2013 she released a personal album called Traces of You, which was released several months after the passing of her father Ravi Shankar. Produced by Nitin Sawhney, and featuring her half-sister Norah Jones as the sole vocal performer, Traces of You earned Shankar a fourth Grammy nomination in the World Music category. In July 2015 Shankar released Home, her first purely classical album of Indian Ragas. Self-composed and produced, Home was recorded over a week in October 2014 in Shankar's new, purpose-built home-studio.

Shankar has made many guest appearances on recordings by other artists, among them Sting, Lenny Kravitz, Thievery Corporation and Nitin Sawhney. Recently, Shankar has collaborated with Herbie Hancock on his latest record The Imagine Project, and with Rodrigo y Gabriela on their album Area 52.

Duets with artists such as violinist Joshua Bell, in a sitar-cello duet with Mstislav Rostropovich, and with flautist Jean-Pierre Rampal, playing both sitar and piano, Shankar has championed her father's compositions. Shankar is also the sole performer of Ravi Shankar's 1st and 2nd Concertos for Sitar and Orchestra, performing multiple times under legendary conductors such as Zubin Mehta. In January 2009 she was the sitar soloist alongside the Orpheus Chamber Orchestra premiering her father's 3rd Concerto for Sitar and Orchestra, and in July 2010 she premiered Ravi Shankar's first symphony for sitar and orchestra with the London Philharmonic Orchestra at London's Royal Festival Hall.

In April 2016, Shankar performed with violinist Patricia Kopatchinskaja during a concert in Konzerthaus Berlin, Germany. The Raga Piloo was originally composed, performed and recorded by Ravi Shankar as a duet with Yehudi Menuhin on the album West Meets East, Volume 2 in 1968.

The show of Anoushka Shankar is worth seeing. You won’t regret because this talented person will gift you unforgettable emotions, help you forget about all problems and allow you to jump into the fantastic world of music for only one evening.

The primary target of our service is to offer Anoushka Shankar tour tickets for the show of your favorite singer at the most affordable price. You may be sure that choosing our ticket service, you will not overpay and get the entrance ticket for the incredible performance, you were waiting for so long. We know everything about the way how a professional ticket service should work. So, with us, you’ll get the lowest Anoushka Shankar ticket prices and the best places for the show.