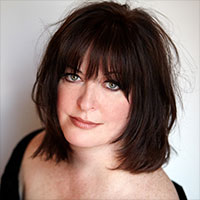 Ann Hampton Callaway will be performing an event in the next dates is right in your area. Buy tickets for your favorite performer or group and you will be able to visit his show already tomorrow!

Share with friends:
Updated: 01-27-2023
Ann Hampton Callaway is a jazz singer, songwriter, and actress. She wrote and sang the theme song for the TV series The Nanny.

A native of Chicago, her father, John Callaway, was a journalist and her mother is a singer, pianist, and vocal coach. She learned scat singing from her father and a love of jazz from his record collection, and she learned classical music from her mother. Her sister, Liz Callaway, is a singer and actress on Broadway. Callaway performed in musicals at New Trier High School in Winnetka. After graduation, she studied acting for two years at the University of Illinois at Urbana-Champaign. She moved to New York City in 1979. During the 1980s, she worked as a cabaret singer accompanying herself on piano, performing jazz, traditional pop, and standards from the Great American Songbook.

Callaway's music and lyrics have also been recorded and performed by Karrin Allyson, Liz Callaway, Barbara Carroll, Blossom Dearie, Michael Feinstein, Harvey Fierstein, Carole King, Patti LuPone, Amanda McBroom, Donna McKechnie, Liza Minnelli, Peter Nero, and Lillias White. In September 2005, Callaway performed her song "Let the Saints Come Marching" on a national TV broadcast on the Fox News Channel. She wrote the song in honor of victims of Hurricane Katrina. Her song "Who Can See the Blue the Same Again?" was released earlier in 2005 to raise money for survivors of the 2004 Indian Ocean earthquake and tsunami.

After the September 11 attacks, she composed "I Believe in America" and performed it on Larry King Live. Around the same time, she wrote "Let Us Be United", which was inspired by an 8,000-year-old prayer from the Rigveda. She recorded the song with Kenny Werner, the Siddha Yoga International Choir, and five-year-old Sonali Beaven, who sang in honor of her father who lost his life on Flight 93. It was released on CD and DVD to benefit Save the Children and the PRASAD Project.

She performed for U.S. President Bill Clinton in Washington, D.C. and was the invited guest performer for Soviet General Secretary Mikhail Gorbachev's Youth Peace Summit in Moscow in 1988.

The show of Ann Hampton Callaway is worth seeing. You won’t regret because this talented person will gift you unforgettable emotions, help you forget about all problems and allow you to jump into the fantastic world of music for only one evening.

The primary target of our service is to offer Ann Hampton Callaway tour tickets for the show of your favorite singer at the most affordable price. You may be sure that choosing our ticket service, you will not overpay and get the entrance ticket for the incredible performance, you were waiting for so long. We know everything about the way how a professional ticket service should work. So, with us, you’ll get the lowest Ann Hampton Callaway ticket prices and the best places for the show.